Islay: walking to Solam and seeing an Eagle

One of the outdoor highlights of my year was a walk I did on Islay back in May with my son/long distance walking companion Billy. We have previously walked up to the island's highest point (Beinn Bheigier), as well as walking to the highest point on England’s south coast (Golden Cap in in West Dorset) among other places.

But our most difficult walk so far was in search of Solam, an abandoned settlement in the hills north of  Ardbeg. It is a walk I have done a number of times and have always found both frustrating and rewarding. I’ve never managed to locate the same places each time and I’ve always got lost at some point.

My first visit was way back in 1984 when my dad, who came  from that part of Islay, led my family over the hills from Callumkill – the farm where my grandparents lived and worked. My memory of that visit is trekking through boggy ground on a hot summer’s day while my dad kept promising “It must be over that next hill”. What we did find eventually, concealed in a hillside, was Tobar  na Dabhaich (well of the hollow). Also known as Saint Michael's Well, my father told me that it was a place where people visited for good luck when they got married, and indeed there were at least two horseshoes above in the rock when we found it, one old and rusted and one seemingly fairly recent with ribbon attached. I believe there were also coins in the water. The well also seems to have been the water supply for a nearby settlement reputed in Islay folklore to have been an abandoned plague village. Some trace of its buildings can apparently be seen near the well... if you can find it.

In 2005 I tried to find the well again with 'clear' directions from my uncle who lives nearby. Not wanting to repeat my dad’s experience of searching in the company of increasingly tired children, I thought it would be best if I went exploring on my own first. The idea was that having found the well and remembered the route I would then return with the rest of the family later on – it would be so easy! I had the ordinance survey map for the area in my back pocket but unbeknownst to me it fell out as I was climbing over the first gate. The weather turned from sunny to cloudy and I found myself lost in bracken that was as tall as me. I had no map and no phone signal, I failed to find the well or any ruins but I did end up at a lonely Loch Larnan with just me and a couple of swans. The Loch feeds Ardbeg distillery with fresh water via the Ardbeg Burn, a stream which you will need to cross to get to Solam - there is a bridge but if you can't even find that you may not get far. When I stumbled across a dead cow lying across the path I took it as a sign to return home

This year with Billy I had the advantage of GPS with the OS map on my phone. The first part is easy enough anyway - you start at the crossroads where the road into Ardbeg diverges from the main road (you can park car/bike in distillery car park). On the north east corner of this there is a single house with a track to its right which you follow for as far as it goes. 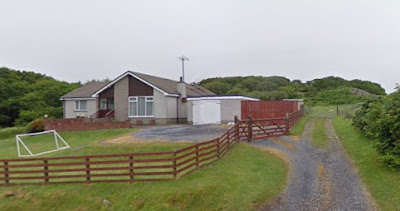 After a field, the track turns left, and ends up at the bottom of a hill with a ruin on top of it You can either follow the track round to the left to skirt the hill or climb over it via the ruin. 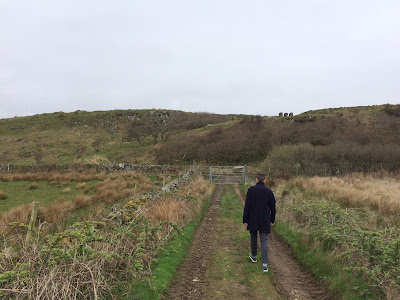 We did the latter. This is marked on the map as 'Airigh Nam Beist' (Shelter of the beast) - the name given to a popular bottling of Ardbeg whisky. 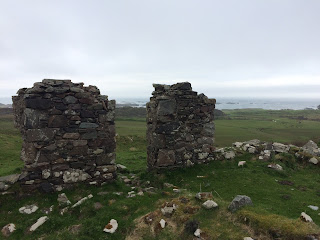 From the bottom of this hill you head across to the bridge across the Ardbeg Burn. After this things got very muddy and we soon got lost. The phone ran out of power eventually and of course in the hills the signal was patchy. The Strava map for this part of our walk before the phone gave out shows that we were walking round in circles some of the time. The low ground there is very marshy, it’s difficult – probably impossible – to avoid getting your feet wet. Once again I failed to find the well!

What we did stumble across was remarkable though. Between us we saw three Adders, recognisable by the zigzag pattern on their backs. That was slightly alarming as you would clearly be in trouble up in the hills with a poisonous snake bite. But as we were scouring the hills for the well a Golden Eagle flew out a few metres in front of us. I believe it was nesting in the rocks, we could hear the young ones in the nest. I’ve only ever seen a (presumed) eagle in the distance before, up close there is nothing like it with its a huge wingspan. 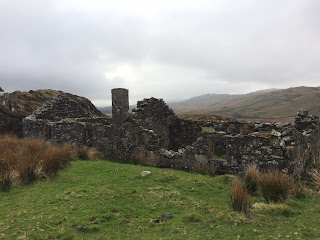 We ended up at the ruin of a house at Solam. This is not one of the supposed 'plague village' remains near the well, but there is a sign here telling its story.

The way back was not so bad. The ruined house is next to the boundary wall for the Callumkill estate, you can see the building marked on the map next to the letter 'm' in Solam on OS Map (extract below). From there there is a fairly direct path back though not as easy as it looks on map - we got our feet wet again but were passed caring by then.

Sometimes the best journeys are those which don’t reach their intended destination but which find something unexpected along the way. I can't leave detailed instructions for this walk. My various misadventures have made me wonder if we are really meant to find everything there- out in the lonely country it’s not hard to believe in fairies or other mysteries! So do go and explore but take care... and maybe wear wellies.