I recently came a couple of issues of  'Off our Blocks' a 'women's team sports zine' published in London in the mid 1990s, a time when women's sport had very little media recognition. This seems to have been a modest attempt to redress this in the DIY photocopied zine format more commonly used for music and politics at this time. The name of course refers to the starting blocks in running and swimming but was presumably also referencing the US feminist magazine 'Off our Backs' which was quite influential in this period. 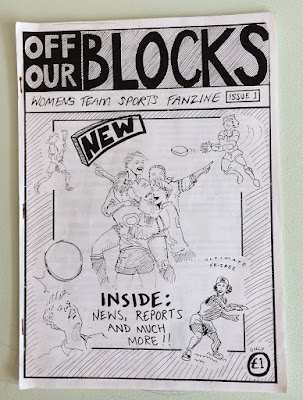 Anyway issue number one from 1994 includes a hand written guide to 'Running the parks of London' with tips on 'things to contemplate while training'. Runners in Holland Park are advised to 'watch out for slow moving nannies and elderly gentleman feeding the squirrels' and 'secondary kids smoking in the bushes at lunchtime', while Kensington Gardens comes with a warning to watch out for 'duck shit, picnicking tourists, rollerbladers, exploding embassies'.

As the contact address for 'Off our Blocks' was in London SE7 (Charlton) no surprise to see Blackheath featured with things to contemplate including 'lots of Georgian houses and BMW’s' and 'why Canary Wharf seems to keep changing position'. As well as 'whether or not to extend the run to nearby Greenwich Park' described as having the 'best views over London at any park. Very up-and-down, so good for endurance but bad if you’ve not done much for a while'.

25 years later these parks are still full of runners, not sure if much has changed from these descriptions. Is there still a marked out 'Peace mile' in Finsbury Park? In terms of running parklife in London the biggest change of course has been the advent of parkrun, a guide to which would take a whole book. 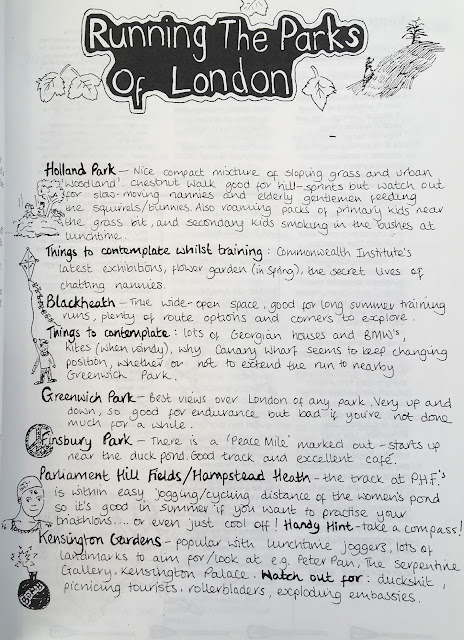 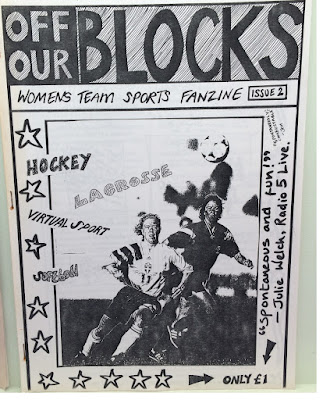 According to a note in Issue 2, the editors of Off Our Blocks were Cress Rolfe and Jen Strang. I came across these zines in 'Still I rise: feminisms, gender, resistance, Act 2' at the De La Warr Pavilion in Bexhill on Sea. The exhibition closed on 27 May 2019.