The Art of Athletics (7): David Hockney on jogging and smoking

David Hockney's most celebrated works feature Californian swimming pools, most notably his A Bigger Splash (1967) which I saw recently at Tate Britain. Runners feature in his 'The Seven Stone Weakling', one of  his Rake's Progress series of prints documenting the artist's first time in  New York in the early 1960s. 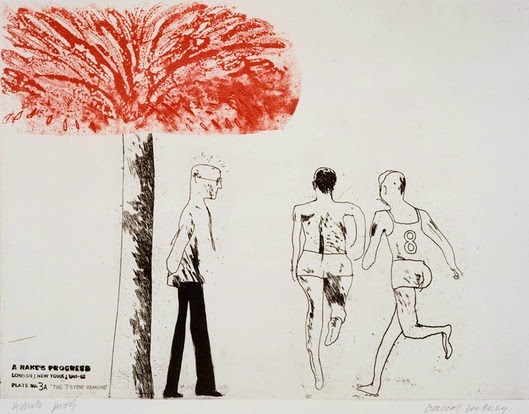 It is the artist himself who watches blankly as two men run past, and Hockney's slightly bemused attitude to fitness continues to this day. In an article in the FT last year in defence of  smoking in the open air he wrote:

'I remember the time I used to walk up through Holland Park to Lucian Freud’s studio. Seeing the black rabbits playing on the grass I sat down to watch them, and lit a cigarette. Then some magpies joined them and I was enjoying it. Then along came three girls jogging, who on seeing me smoking gave me a no-no salute. I pondered them and noticed they had not seen the magpies or the rabbits. They thought they were very healthy, but I thought I was healthier. They were obsessed with their own bodies. When people are jogging they are thinking of body management; when you walk the mind can range over far and wide. Walking is better than running, which wears out your knees and leaves you with excruciating shin pain'.
(David Hockney, Tobacco killjoys are less healthy than the smokers they ban, FT,  17 October 2014)

Of course I don't agree with him about running - the mind can range far and wide while running even if both runners and walkers can be so wrapped up in their own thoughts that they fail to notice their surroundings. But I am sympathetic to his opposition to banning smoking in parks - something that has already happened in New York and has been proposed for London. We don't have to like everything that people do in 'The parks, the great unroofed outdoors, places where people are not crowded together like on the street' (Hockney), but I think for the most part people should be free to do what they like as long as it doesn't genuinely harm other people. Some people would ban smokers, others would ban drinking, dogs, groups of young people, music or sports. No doubt some people find hundreds of runners charging round their local park on a Saturday morning an inconvenience, but parks would be dead spaces if every activity that mildly irritated somebody else was banned.  I don't particularly like getting the occasional mouthful of smoke if I run past somebody smoking, they might not like their peaceful morning stroll being disturbed by me, but we have to get along - as they say at every parkrun briefing, remember you are not the only park users.


See also in the Art of Athletics series: