It was tough running, but I loved taking part in the Saucony English National Cross Country Championships a couple of weeks ago (21 February), held at Parliament Hill Fields on London's Hamsptead Heath. I haven't got a great deal to add to what has already been written about it elsewhere, including Jolyon Attwooll's excellent participant's account in the Telegraph, 'The greatest running race you have never heard of' (I realized the other day that Jolyon is the guy pushing a running stroller who regularly overtakes me at Hilly Fields parkrun, though if it's exceptionally muddy I can sometimes hope to overtake him as he pushes uphill!). 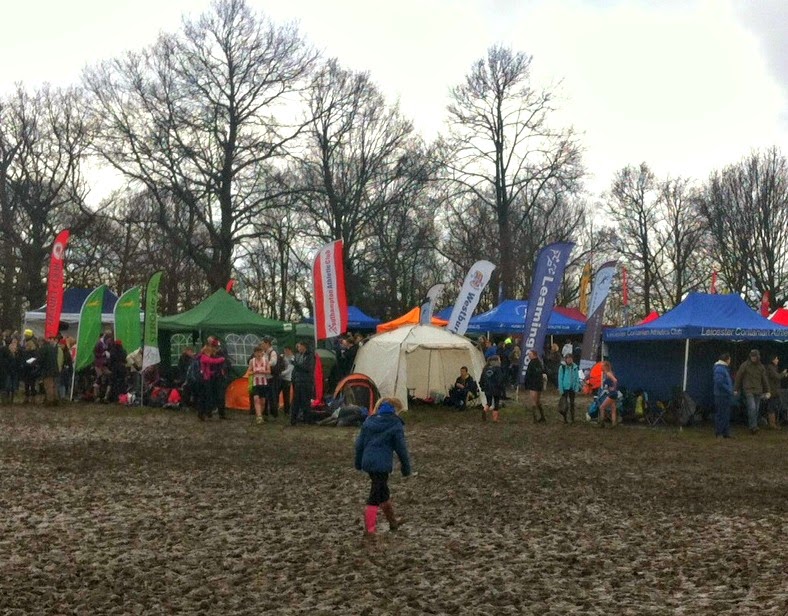 Attwooll compares Parliament Hill to 'a scene from a medieval battlefield. Beside the course, hundreds of tents were pitched over a churned hillside, banners unfurled, bearing the colours and crests of running clubs from across the country'. It reminded me too of Glastonbury, with tents surrounded by mud, an endorphin-fuelled festival atmosphere, and some of the better prepared runners changing from spikes into wellies when not running. 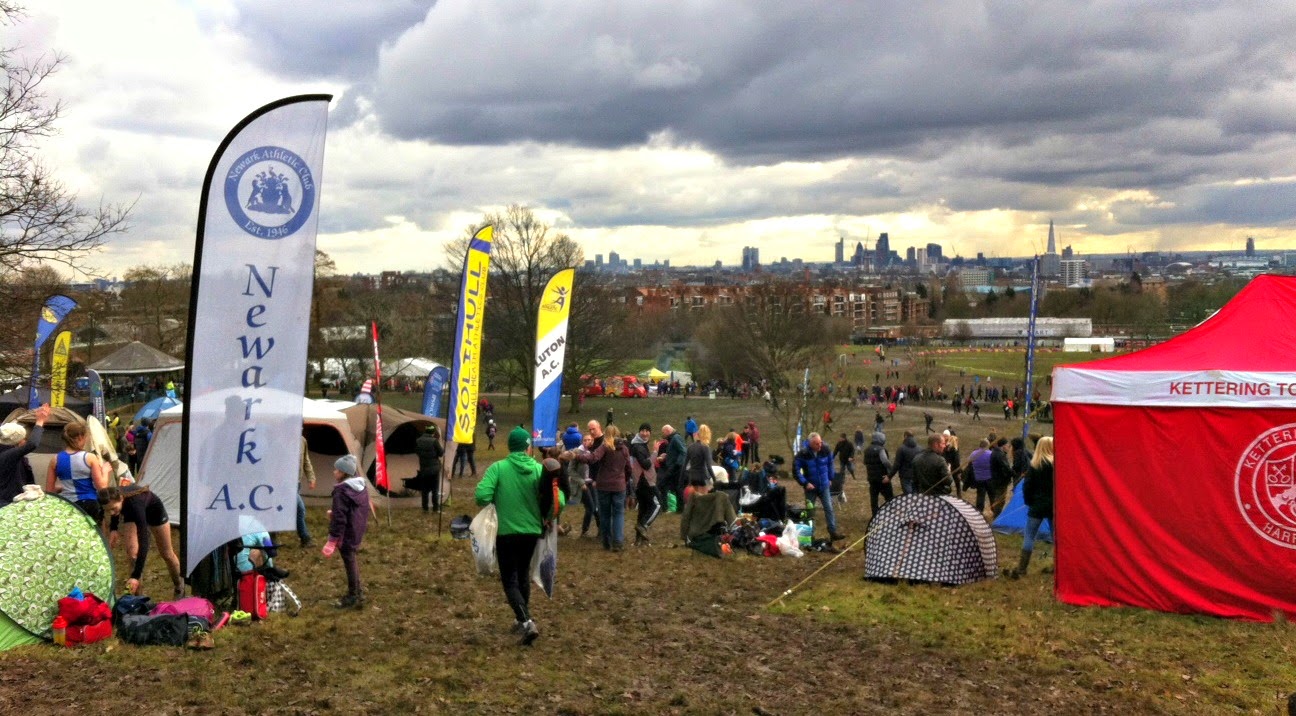 The charge up the hill at the start of is one of the most iconic moments in English running, and I watched some of the nine races of younger runners and senior women heading up it before doing so myself in the Senior Men's. Of course on the inside you don't spend any time looking back at the fine views over London, you are just aware of the ascent, the mud, and the crush of people around you until the race spreads out. 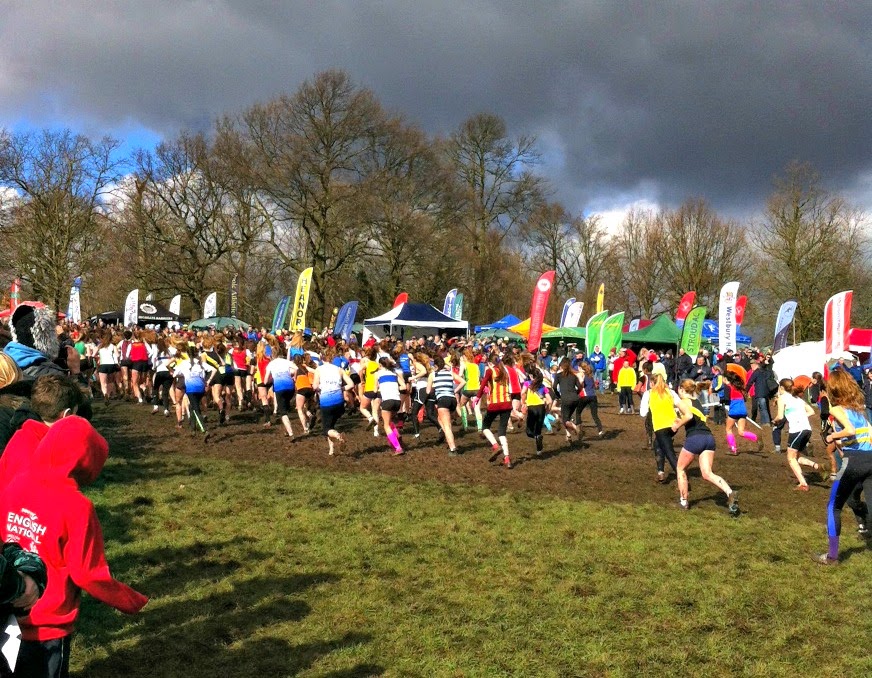 There were many kinds of mud to be savoured over the 12 km race, including a stretch where the sun dazzled the runners as it reflected off the wet, soft earth. As men's race winner Charlie Hulson told Marathon Talk last week, on the second lap it felt like a different course as the mud had been churned by 2000 pairs of feet in addition to the 3000 who had taken part in the earlier races. If it was bad for him, spare a thought for those of us further back who had to follow (in my case) 1700 more pairs of feet - in some places it felt like wading through porridge. I fantasised about a sprint finish on the down hill final stretch, but the mud continued up to the line so even here it was hard to build up pace. 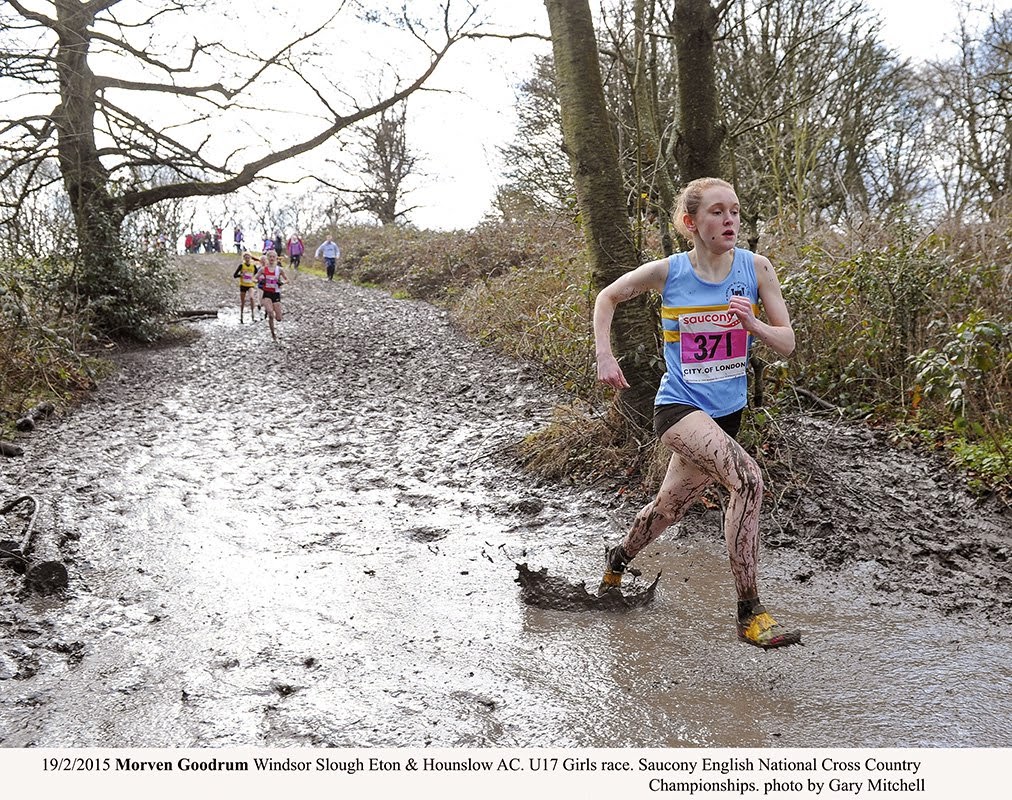 With a record 5283 runners taking part in the championships, both the Nationals and club running more generally seem to be in good health. My team, Kent AC, came 8th out of 145 clubs in the 6 to Count (no thanks to me, I didn't score), with Notts AC winning the team competition. Lily Partridge (Aldershot Farnham & District) won the senior women's race. 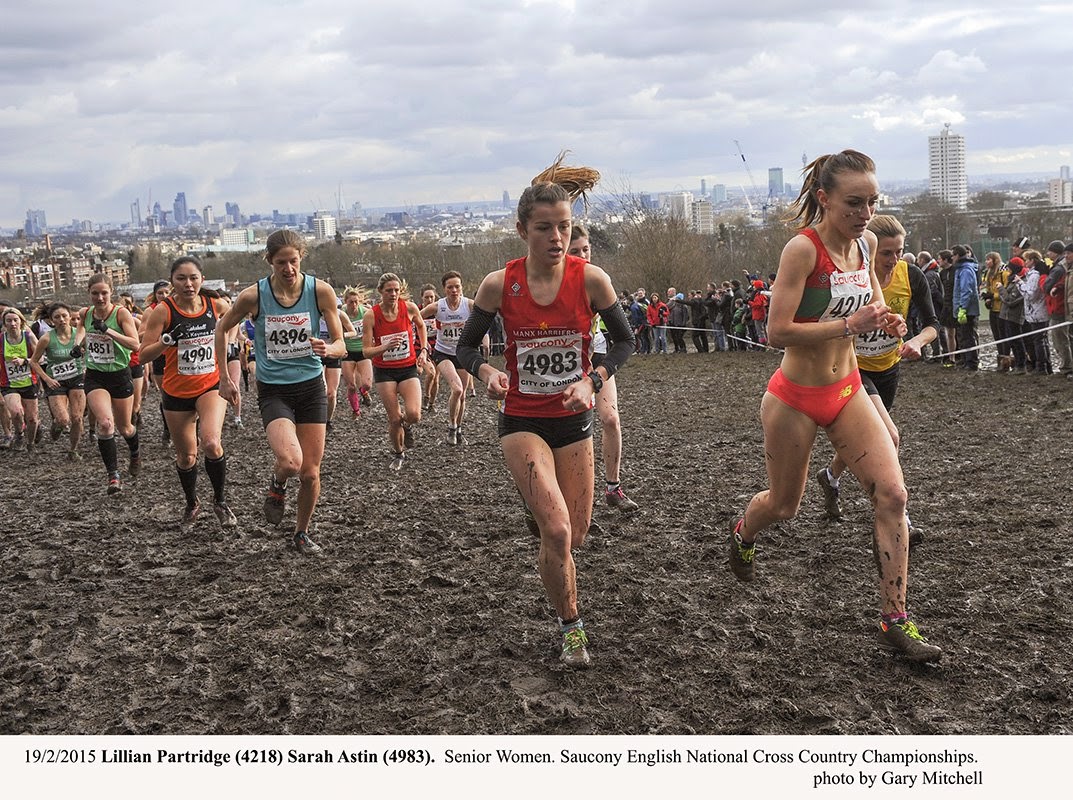 Top pictures by me, bottom two - i.e. the decent ones- © Gary Mitchell from the excellent gallery of photos at the English Cross Country Association site: . Runners can also find photos of themselves in various states of desperation by entering their race number here). There's lots of film on youtube too, my favourite is headcam footage of the entire race from Cambridge University Hare and Hounds.