Andy Murray is going head to head with Roger Federer in the Wimbledon  semi-final later today, and it will not be a walk in the park. In fact, in the course of  playing a game of tennis, both players will do a fair bit of running. For instance, to win the Australian Open earlier this year Novak Djokovic ran 16.52 km over 24 sets - an average of 688m per set (source)

The running is naturally in short intense bursts, so the running tennis players do in training will often feature sprint intervals. Andy Murray's former fitness trainer Jez Green has said: "Running 200m and 400m targets the relevant energy systems for tennis better than steady state longer runs so they will make you perform better and longer in specific match conditions".


Andy Murray regularly trains in the Winter in Florida, including track sessions at the Tropical Park Stadium in Olympia Heights (near Miami) and running on the beach. An  observer of one of his sessions on the track there in 2008 watched him doing  10 x 200m intervals in the heat, while a 2012 report mentions him doing 400m intervals on the beach.. By all accounts he's pretty fast,  reporting in 2012  that he has run 400m in 53 seconds. 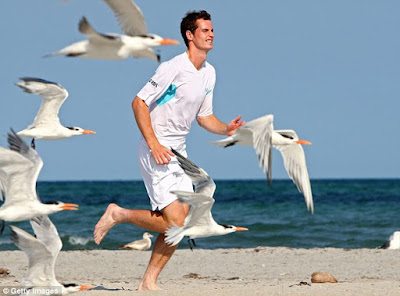