I recently came across a couple of adverts from 1913 for sports shops in London - they appear in issues of Chin Wag, magazine of the Eton Manor Boys' Club which the Bishopsgate Institute has digitised.

F.H. Ayes Ltd was based at 111 Aldersgate Street (near to where the Barbican is now), and were 'manufacturers of every requisite for... lawn tennis, golf, football' etc.  The advert states that the firm was established as early as 1810. As well as sports equipment, they  manufactured board games and indeed wooden rocking horses. In the late nineteenth century they also installed 'removable grandstands for the Centre Court at Wimbledon' (John Lowerson,Sport and the English Middle Classes, 1870-1914, Manchester University Press, 1995). 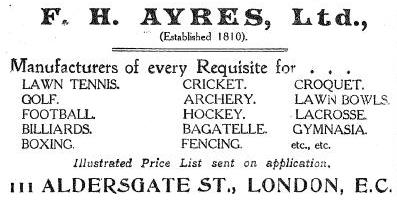 Spalding's described itself as 'the great London House for Sporting Requisites of the highest class'. In this period they had two London stores - at 317/18 High Holborn and 78 Cheapside.  They also had shops in Birmingham, Manchester, Liverpool, Edinburgh and Paris. But their home was in the United States where Albert Goodwill Spalding (1849-1915)  was an influential figure in the history of baseball- in an attempt to popularise the game in England he helped arrange a tour of baseball clubs in 1889, including a game at Kennington Oval (Mark Lamster, Spalding's World Tour: The Epic Adventure that Took Baseball Around the Globe, 2007). He opened his first shop in New York in 1885, and the company is still a big player in US sports. Interesting that global sports brands were already in existence, and present in city centres, more than a hundred years ago.