As a British child in the 1970s, Saturday afternoons meant 'World of Sport' on ITV. At 4 pm, between the half time football scores and the final results, there was always wrestling with larger than life characters like Giant Haystacks and Big Daddy.

I had a very entertaining flashback to those days last weekend when I went to see wrestling at the Amersham Arms in New Cross (once home to another 1970s wrestling legend, Mick McManus). I'd had a long day, starting off my cross country season with an arduous race on Wimbledon Common (Surrey League Division One), but I'm glad I left the pub celebrations early to make my way back to SE London as it was a great night out. The event, organised by Half Nelson and Kapow! promotions, was very much in the spirit of British wrestling's golden age. Pantomime heroes and villains were escorted to the stage to their own theme tunes played by houseband The Giant Haystackers (wearing Mexican wrestling masks) - including The Eye of the Tiger, Dirty Deeds Done Dirt Cheap and Panjabi MC's Mundian To Bach Ke.

There was chanting for local favourite The Trashman (Marcus Broome) - well he does run the great Deptford tattoo parlour Kids Love Ink (responsible for decorating my right arm) - and booing for the 'bad guys' Karl Atlas, Rishi Ghosh ('Prince of Mumbai') and 'Mr Massive' Chuck Cyrus. Other wrestlers included Dan 'The Hammer Head' and Dark Dragon. 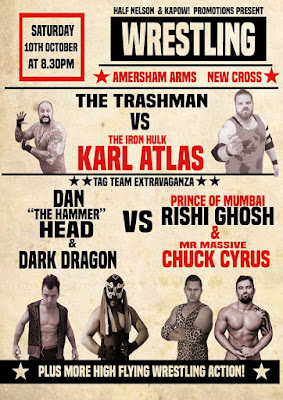 Yes I know this is a running blog, but other sports are available - though of course some people would question whether this kind of wrestling actually is a sport. Well no matter how camp or choreographed the action can get, there's no denying its athleticism. You try flying through the air and landing on your back!