The 37th London Marathon starts this Sunday from Blackheath and the top of the adjoining Greenwich Park, winding its way via Woolwich to run back through Greenwich next to the bottom of the park - all 40,000 of us.

If you're looking for a bit of inspiration for your run look no further than a site in Greenwich Park itself. Other than a slight mound there's not much to see, but there is helpful sign to tell you what you're looking at: the site of what is now believed to be a Romano-Celtic temple, first discovered in 1902 and re-excavated by archaeologists for Channel 4's Time Team programme in 2000.

So what's all this got to do with running? Well for a start, there's a fragment of a statue found there which is believed to be the arm of the Goddess Diana. It is possible therefore that the temple was dedicated to Diana, the Goddess of the moon, woodlands and the hunt.  Sometimes referred to as 'fleet footed Diana' she was often described as running through the forest with her animals.

Like many runners, Diana liked to bathe her feet after a hard day's exertion, a scene featuring in many paintings over the centuries including Titian's 'Diana and Actaeon' (above). In the Roman writer Ovid's version of this legend, this takes place at a pool  where 'the woodland goddess, weary from the hunt, would bathe her virgin limbs' accompanied by her nymphs. Actaeon, also out hunting in the woods, spies the naked Diana and in punishment she turns him into a stag who is chased and killed by his own hounds. Poor Actaeon doesn't realize at first that he has been transformed and he 'took off, marveling at how fast he was running. But when he saw his face and horns in a pool, he tried to say 'Oh no' but no words came' (Stanley Lombardo's translation of Ovid's Metamorphoses)

I guess the lesson for runners here is if you find yourself running faster than expected, especially at the start of a marathon, you might regret it!

If  Diana fleet of foot is not enough to get you running, another object found in Greenwich Park  depicts a female figure holding a shield, which the information board states is likely to represent the Roman goddess Victory, probably better known to runners as her Greek equivalent - Nike. 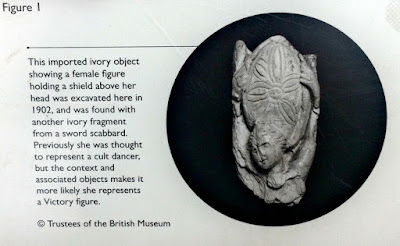 Yes, Greenwich Park is a veritable temple of running and on Sunday thousands of devotees will be celebrating there.