When Kent AC were based at the Brockley Jack (1900s)

Like most sporting bodies, my running club Kent AC has an association with certain watering holes. We have our annual general meeting at the Blythe Hill Tavern in Catford, we gather each year after the London Marathon at the Chandos by Trafalgar Square, and lately we've had social events at The Station Hotel in Hither Green and the Blackheath Wanderers club house on Eltham Road.

Still in the old days Kent AC, like many clubs, not only gathered in pubs but had their headquarters there. This headed paper is from the 1900s (it is from the club's archives held at Lewisham Local Studies Centre) and shows that the club's headquarters at that point were at the 'The Brockley Jack Hotel, Crofton Park'. 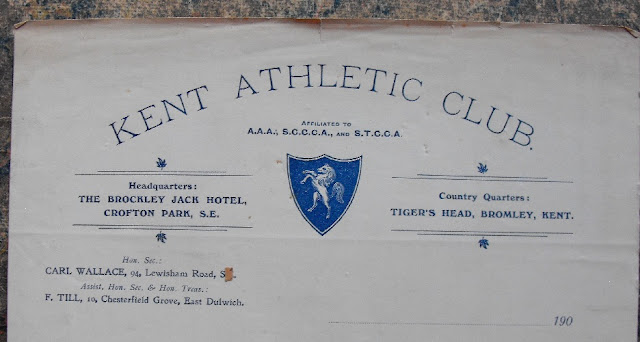 The Brockley Jack had just been rebuilt at this point, the current building from 1898 replacing an older inn once known as The Castle on the same site (see history at Transpontine).  Writing in the 1890s, Walter Besant claimed rather dubiously that  'It was named after Jack Cade and was formerly frequented by Dick Turpin and other highwaymen' (London South of the Thames).

The Jack on Brockley Road is no longer a club HQ, but it is still very much in Kent AC's London Borough of Lewisham heartland, just a mile or so away from our track at Ladywell Arena. Interestingly Kent AC's headed paper from this period also mentions somewhere further away - 'Country Quarters' at 'The Tiger's Head, Bromley'.

With Lewisham becoming increasingly urbanised by the 1900s, the club no doubt had to go further out for cross country races, hence a Bromley HQ perhaps. Not sure what pub this refers to though. There is a still standing Tigers Head on Masons Hill BR2 in Bromley proper, but there was also a now demolished pub of this name on the Bromley Road, Bellingham which would have been closer to to Kent AC territory.

Still have a plan for a run between pubs associated with the club at some point, would be good to find out more about this and the people mentioned - the honorary secretary is named as Carl Wallace, 94 Lewisham Road, with his deputy 'F. Till, 10 Chesterfield Grove, East Dulwich'.
Posted by Neil Gordon-Orr at 15:59