On a Rosh Hashanah tip, this week's Friday photos come from Tel Aviv in 1942. I came across these images at the US Library of Congress Prints and Photographs Catalog (there's more here). They were taken at a United Services Athletic meeting at the Maccabiah Stadium on Sat. May 2, 1942. 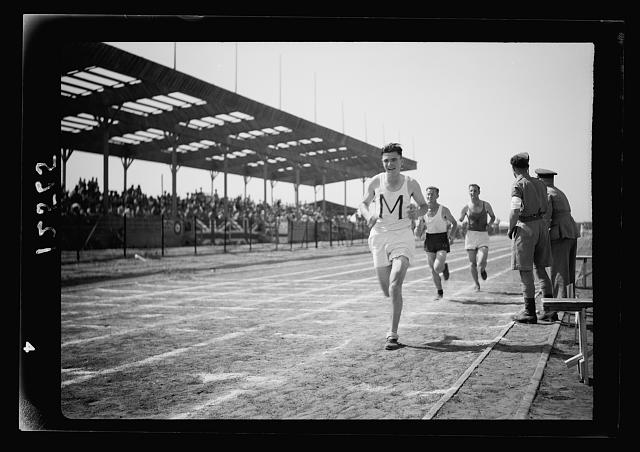 The Stadium was built in 1932 for the Maccabiah Games, the international Jewish athletics event. Come the outbreak of war,  Italy had bombed Tel Aviv in 1940, and by 1942 Nazi forces commanded by Rommel were heading towards the Suez Canal from North East Africa. Hence the presence in Palestine of  personnel from across the allied forces, chiefly from Britain as the colonial power there but also from the United States and elsewhere.

An article from that year in the Jewish Telegraph states: 'American soldiers on the Middle Eastern front are the latest to enjoy the hospitality of Palestine’s “Service Clubs,” which are the Holy Land’s version of the U.S.O., according to a report received here today by the United Palestine Appeal. The “Service Clubs,” whose welcome mats have already been trodden by thousands of British, Fighting French, Polish, Czech, Yugoslav, Dutch and Belgian troops, as well as Palestine’s own Jewish fighters in the Allied forces, are subsidised by U.P.A. funds. The clubs furnish information, arrange parties, dances, sightseeing trips, sports, etc., and even provide home-cooked meals at the homes of Jewish families'.

So who took part in this United Services meeting in 1942? Certainly British military - note the Union Jacks draped around the side of the ground - and presumably Americans (the photos being collected at US archive). I wonder whether the black athlete in the photo below below is an African-American? 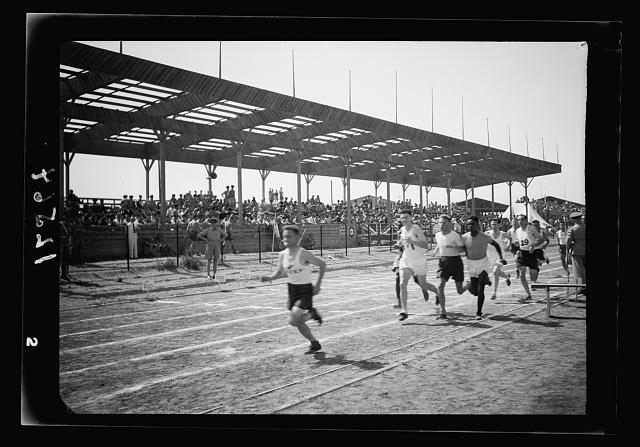 The winner of the 800m was J.V.Powell, pictured below in Tel Aviv. This was John Powell, one of the best 800m British runners of the 1930s - he ran in the 1932 (Los Angeles) and 1936 (Berlin) Olympics.. According to Track Stats (November 2007) 'Powell served in the Middle East with the RAF as a Squadron-Leader during World War II, being mentioned in despatches three times. He also organised sports competitions for the troops and managed some more running in 1941-42, winning Palestine titles at 800 and 1500 metres. After the war... He went to Iraq on behalf of the British Council and was instrumental in Iraq sending four athletes to compete in the 1948 Wembley Olympics'.  So perhaps Powell was one of the organisers of the Tel Aviv event. Note his Amateur Athletics Association vest in photo. 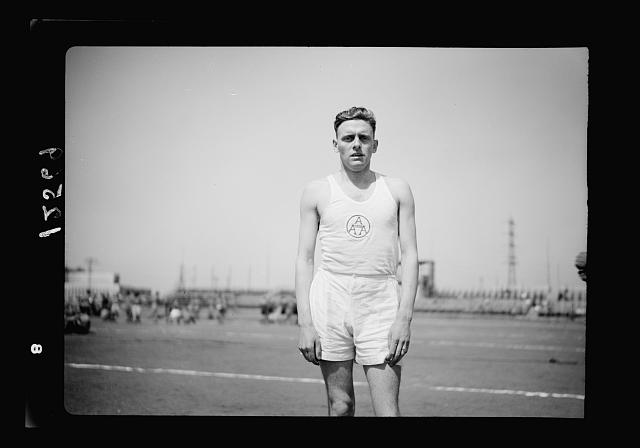 There were also Indian athletes - the caption to this photo says  'Centre figure Indian 'runner up' in a running race. 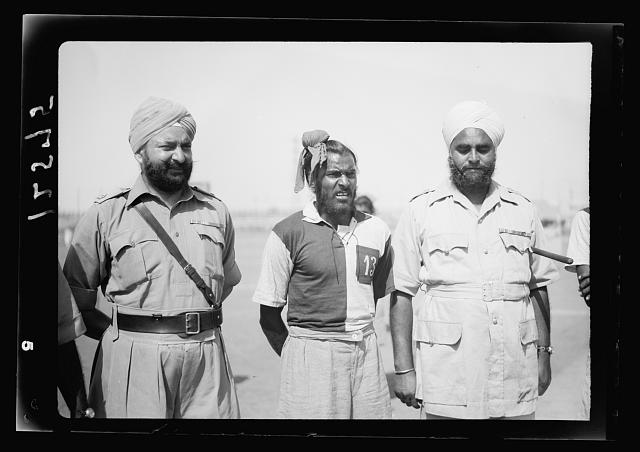 Given that the event took place in the Jewish sports club stadium I wonder whether local Jewish athletes also took part, possibly Palestinian Arabs too as both Jewish and Arab soldiers fought with British forces during the war. So what does the 'M' signify on the runner's vest in the top photo? I wonder whether it has something to do with 'Maccabiah' or the Maccabi Tel Aviv Sports Club, which started in the 1930s. Anyone know?

More in the Friday Photos series: