This week's Friday photo appears to be an unremarkable image of four athletes running. Even the knowledge that it comes from the 1972 Olympics doesn't add very much to it. But what does make it extremely special is that this image is now travelling through space aboard the first spacecraft to leave our solar system. Earlier this month it was announced that Voyager 1, launched by NASA in 1977, had reached interstellar space. And amongst the images of life on earth included on Voyager for the benefit of any curious aliens who one day intercept it is this one. 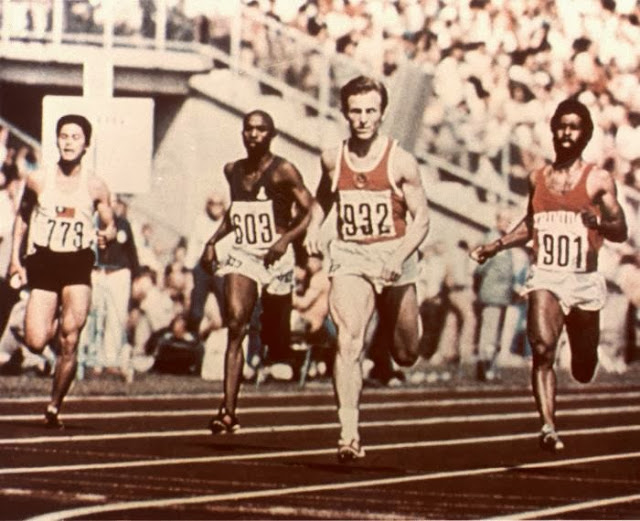 Voyager famously includes the Golden Record with sounds and images from our planet, selected by a committee chaired by Carl Sagan. There is music from Bach to Chuck Berry and pictures of landscapes, animals, buildings and humans engaged in various activities - including running. Despite the Cold War aspects of the space race, there is something very optimistic about this selection, a kind of planetary humanist vision that celebrates life on the third rock from the sun in all its diversity while simultaneously affirming what we have in common as a species beyond political and social divisions.

So who are the runners?  The NASA site just says that it is Soviet/Ukrainian sprinter Valeriy Borzov in the lead, and Borzov's wikipedia entry says that the photo was taken in the 200m heats at the 1972 Olympic Games (he went on to win the Gold medal in both the 100m and 200m). A look at the records of the Games, cross referenced to other photos, allows us to identify them left to right as follows:


Previously in this series: