Running on Screen (4): Race strategy from The Office - run fast at the start, middle and end

Finally got round to watching the last episode of The (American) Office. I loved this programme in both its UK and US versions, and the latter also included one of the funniest treatments of running on TV. In 'Fun Run' (Series 4, Episode 1, 2007), hapless boss Michael Scott organises a charity 5k: 'Michael Scott's Dunder Mifflin Scranton Meredith Palmer Memorial Celebrity Rabies Awareness Pro-Am Fun Run Race for the Cure'. All the staff at the paper firm are instructed to take part and kitted out in specially printed T-shirts. 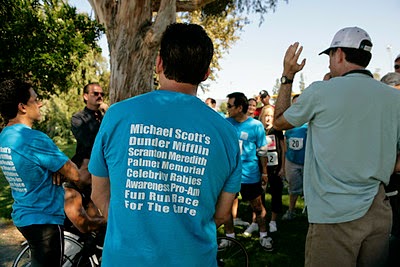 Michael ends up in hospital with dehydration after carbo-loading on fettuccine just before running and declining water. He comments 'and while I eventualy puked my guts out, I never puked my heart out. And I'm very, very proud of that' 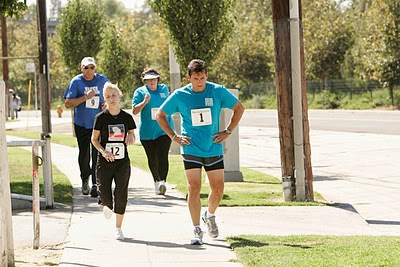 In this episode too, the will they/won't they romance of Jim and Pam (pictured below) is finally confirmed, and the two discuss race tactics:

Jim: 'So what's your strategy for this race?'

Jim: 'Why won't more people do that?'

Pam 'Because they're stupid'. 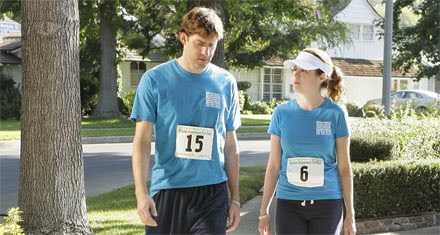 (although the series is set in Scranton, PA, the race was filmed in the streets of Los Angeles - Chandler Boulevard near Tujunga, north of Magnolia Blvd, to be precise)

Other posts in the 'Running on Screen' series: