All over Battersea, some hope and some despair - Assembly League Race 3

The third of this season's Assembly League races was held in London's Battersea Park last Thursday (4th June 2015), hosted by Serpentine Running Club. 318 runners from 13 clubs took part on one of the hottest days of the year so far - with heat, pollen and London air quality there were plenty of dry throats and coughs by the end.

Johh Franklin (Serpentine) was first in 15:24, followed by Chris Greenwood (Kent AC - 15:29) and Richard Kowenicki (London Stock Exchange - 15:30). Amy Clements (Kent AC) was the women's winner in 17:07- making it three out of three for her this season - with Martha Lloyd second (Victoria Park Harriers, 17:47)  and Clare Elms (Dulwich Runners, 17:58) in third place. In the club placings, Serpentine came first in both  men's A-team and B-team, while Kent AC  cleaned up in women's A-team and B-team. A-team scores are based on positions of each club's first four finishers (so Serpentine runners finished in 1st, 4th, 6th and 10th place = 21 points) with the club with lowest points winning. B-team is the same, but for the next four finishers from each club. Final results are now available here  (see also the Assembly League facebook group).

With three races still to go - Greenwich peninsula, Victoria Park, Beckenham - Lewisham's Kent AC are still ahead in all team competitions but by no means secure. Plenty still to run for.

The 5k course started at the bandstand in the centre of the park, before heading on a circuit and half of the park. There aren't many parks in this country where a run takes you past a Buddhist peace pagoda, but of course Battersea has one, built by monks, nuns and followers of the Japanese Nipponzan Myohoji Buddhist Order as part of the 1984 Greater London Council (GLC) Peace Year - shortly before the GLC was abolished and the park handed over to be run by Wandsworth Council. In fact I saw The Pogues play in the park in July 1985 in one of the great farewell free festivals organised in the last days of the GLC. 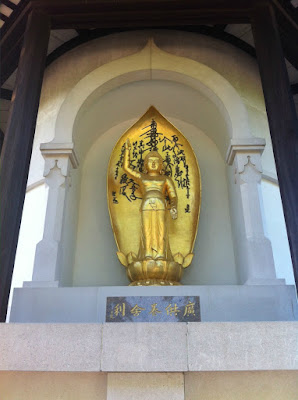 Battersea Park was opened next to the River Thames in 1858 and has a long sporting pedigree. The first football match played under Football Association rules took place there in January 1864. The park was regularly used by London Olympiades Athletics Club, one of the first women's athletics clubs in Britain (founded in 1921). In fact the first women's mile race in the UK was organised by Olympiades in Battersea Park in 1932 (source), in a period when many athletics officials thought women weren't capable of running such long distances!

The women pictured below were taking part in a May 1931 trial in the park to select athletes to run in Florence later that year.

Today the park hosts the Battersea Park Millennium Arena, with its eight lane running track, as well as other sporting facilities.

(the title of this post - 'All over Battersea, some hope and some despair' is a line from Morrissey's 1992 song, 'You're the One for Me Fatty', the video for which was filmed in the park).