House Every Weekend - running in Ladywell

The video for House Every Weekend, David Zowie's summer UK number one single, features some great dancing but also the figure of a runner making his way through London streets.

But which London streets? I'm not 100% sure of the road this is (above*), but the bridge he runs over will be very familiar to South East London runners, especially members of Kent Athletic Club and others who train at Ladywell arena in Lewisham.

The bridge crosses the railway next to the track - if you look closely you can see floodlights.Many of us run over that bridge every week on the way to and from the track, and indeed sometimes running back and forth over the bridge forms part of the training. 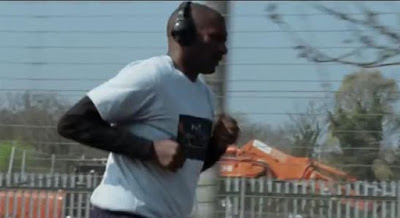 * my first thought was that this must be Malyons Road which runs down to the railway bridge, but although the housing is similar I wasn't so sure. However local residents have convinced me that it is - there have been a few changes to trees and scaffolding since video was filmed, just as the railway bridge now looks quite different with the trees in leaf - guess it must have been filmed over last winter.