Songs about Running (3): The Jogger by Bobby Bare 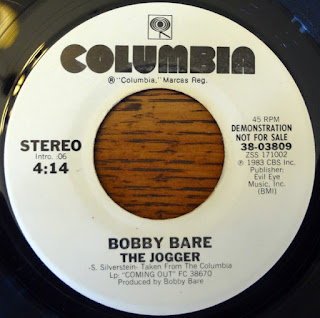 'The Jogger' by Bobby Bare was a novelty country hit in the US top thirty in 1983. It's an odd song to say the least - starting off with a homophobic trucker bemoaning having to share the road with a guy:

'dressed like they do in baby blue,
With shortie shorts and a headband too,
I yelled Sweetie I bet that you are the hit of the men's room locker...
But I'm a runnin' late with an overload,
So get your Adidas off a this road'.

But as the trucker accelerates the jogger gets faster and faster and leaves him behind. Well maybe that's because the jogger is apparently Jesus Christ himself:

Bizarre, but then this is the man who also sang the born again football anthem 'Drop Kick Me Jesus (Through The Goalposts Of Life)"