There were three races - men's 40 to 49, men's 50 to 59 (both run over about 6 miles) and a third, shorter race that combined the women's competition and the men's 60+champs. In total there were 313 finishers from clubs across the Kent and South London area.

My club, Kent AC, won the men's V40-49 headed by Chris Greenwood who finished first by a 90+ second margin - he has won the British Masters V40 XC three years in a row, so no great surprizes there. Tunbridge Wells Harriers were in second place, followed by Medway & Maidstone AC.

The men's 50-59 race was won by Ben Reynolds (Tonbridge AC), whose club also won the team competition, ahead of Blackheath & Bromley Harriers and Tunbridge Wells Harriers.  With 'three to score' (i.e. results of first 3 for each club determining team score), and only three Kent AC finishers the team were dependent on me as third scorer - not a great omen - and we came in at a respectable fifth (out of 13).

The men's 60-69 race was won by Jeremy Carnell (Cambridge Harriers), with Blackheath & Bromley Harriers winning the team competition ahead of Cambrige Harriers and  Kent AC.

Vernon Thomas (Greenwich Tritons) was first home of the eight 70+ runners, including the only 80+ runner, Richard Pitcairn-Knowles (Sevenoaks AC), who incidentally I also came across running recently at Hilly Fields parkrun

The women's race overall was won by Clare Elms (Dulwich Runners), with Kent AC the winning club in the 35-44s. Runners up were Dulwich Runners with Blackheath and Bromley Harriers  in third place.

Petts Wood Runners won the women's 45-54 ahead of Folkestone Running Club (2nd) and  Kent AC (3rd), though the first finisher was Maria Heslop of Paddock Wood AC  who unfortunately for them did not have the required three runners to feature in team results.


The first part of the course was a charge into strong winds and a lap of an open field - not my favourite terrain - before heading into the woods, with a couple of fairly short uphill sections and a nice technical descent (i.e. watch your feet or fall over, or in some cases watch your feet and still fall over). Much of the woodland section is along narrow paths with limited room to pass, so runners need to pick their moments to overtake - the flat section along Woodland Way giving one such opportunity. There were only a couple of patches of serious mud, and many of the runners managed fine with trail shoes rather than spikes. 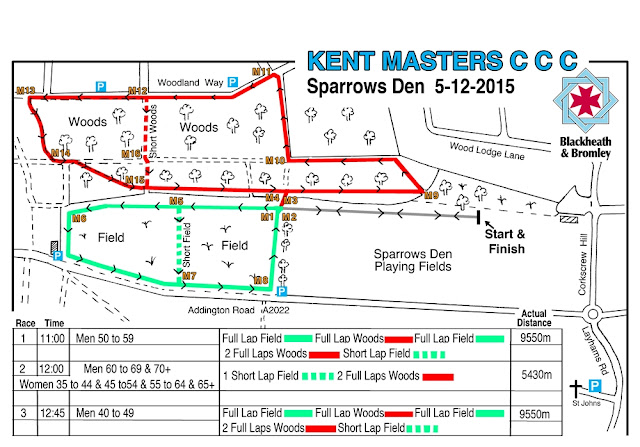 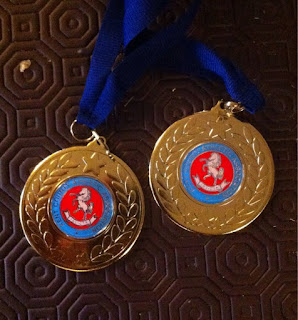 Afterwards we retired to The Swan in West Wickham for post-race refreshments and to compare medals. While some left in a worse state than they came in, I don't believe anybody did as badly as a hapless Blackheath Harrier returning from cross country here in 1896 and falling off the train at Lewisham!