South of the Thames Cross Country Championships 2015: 7.5 miles at Somerhill

The 2015 South of the Thames Cross Country Championships took place on Saturday 19th December, hosted by Tonbridge Athletic Club in the grounds of the schools at Somerhill, outside of the town.

242 runners completed the tough 7.5 mile course, with the men's and women's races taking place together. The men's winner was Kent A.C.'s John Gilbert in 42:29. For much of the race he was neck and neck with Tonbridge's Max Nicholls, the 19-year-old Team GB junior mountain runner, but Gilbert pulled away on the last lap and Brighton and Hove's Stephen Ferroni squeezed past Nicholls on one of the final hills to take the silver ahead of Nicholls in third place. 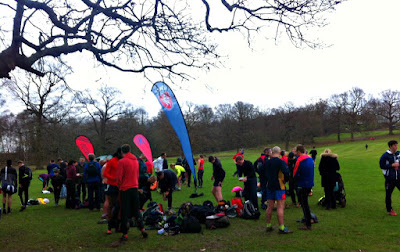 In the men's team competition the big prize  - in every sense of the word  - was the Dewar Championship Shield for the six-to-score (i.e. team with the lowest combined points for their first six finishers wins, with one point for winner, 2 points for second place etc). Kent AC won by a six point margin from Tonbridge, with Belgrave Harriers in third. In the 12-to-score competition, positions were reversed with Tonbridge AC first, Kent AC second, and Brighton and Hove AC third.


The women's race was won by Dulwich Harriers, with Kent AC in second place and Belgrave Harriers in third position.

The course, which had been very well laid out by Tonbridge AC, was essentially set on one side of a large hill in the grounds of Somerhill House. Built in the 17th century, the building and its estate have a rich history including a period as a World War Two prisoner of war camp and a link to the wonderful stained glass windows by Marc Chagall in the neighbouring village of Tudeley. Since the 1990s Somerhill has been the home to several independent schools. 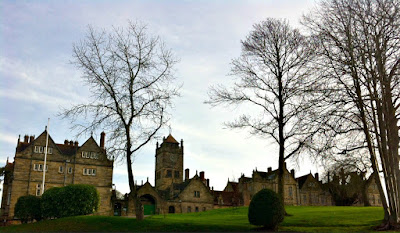 Somerhill was painted by JMW Turner in 1811, and the hill shown in the painting was the one we ran up, down and across at the weekend, with three significant ascents on each of the three laps. The ground was soft, and fairly muddy/slippery in places. A few tumbled and most were fairly drained by the end - I know I was, coming down with a cold I considered getting round without stopping an achievement in itself.

Film of the race from Tonbridge Athletic Club

Kent AC (my club) have been doing really well in cross country in recent years,  winning the men's Surrey League and men's and women's races at last month's South of the Thames Team Race (a shorter race previously known as the South of Thames Junior race).  But the club have not won the South of Thames Championship since 1907, when the team came first in the race held at Bromley. J. Keywood won the race for Kent AC that day, followed by R.H. Backshall (Eastbourne) and J.S. Satch (Kent AC) in third place.

Kent AC's Albert Aldridge, one of the country's top distance runners of the period, won the South of the Thames in 1902, though on that occasion the club finished second to Brighton and County Harriers. The location again was Bromley - 'Mr A C Norman's park' - which as today's Norman Park Recreation Ground hosts Bromley parkrun and the running track used by Blackheath and Bromley Harriers. 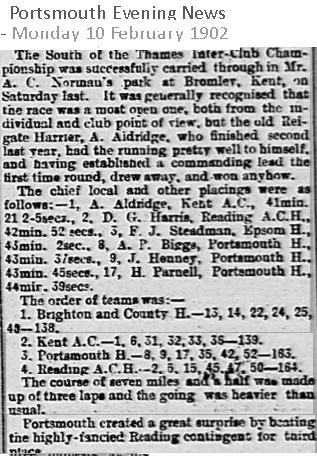