Songs About Running (5): Jogging for Jesus

You know when you are out running and some one heckles you, and of course you don't lose a step, but you spend the next couple of miles thinking about the really smart reply you should have come out with?

Last week I had my first religious heckle, with some guy shouting out that I should look to save my soul rather than my body, and that I should stop jogging. Obviously that was plain rude, I run not jog, mate!

I wasn't going to hang around to debate the fine points of theology, but first I had an anti-religious wave of anger. I could have taken him down straight away with some thoughts on 'the problem of evil' - you know, if God is all-powerful how come He allows terrible things to happen like war, famine and pumped up guys shouting at passers by.

But then as I calmed down, I thought 'hold on, surely you can take care of your body AND your soul?'. If you're of a religious persuasion, shouldn't you make the best use of the legs and lungs that the Good Lord gave you? And in fact, some of the greatest runners have been righteous believers, I mean haven't you even seen Chariots of Fire?

And then I realized something else, that while he had included me in his line of fire and brimstone as I ran past  him, his rant had first been directed at a woman running towards him. So really it was the old old story of some shouty bloke hiding behind religion to tell women what to do with their bodies.

By the time I'd worked all this out, the miles had ticked by, it would have been much quicker if I'd simply retorted - you need to get Jogging for Jesus!

Jogging for Jesus is a fine slice of gospel funk by Leslie Harris and the House of Fire from 1980, a time when at the height of the 'jogging boom' in the USA there were many running-related songs. But unlike, say, the similarly themed The Jogger by Bobby Bare from the same period, this is actually a great piece of uplifting music. 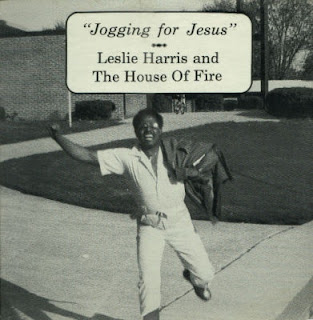 'Early one Sunday morning, Jesus came into my room
He woke me up saying, we're going to have a run
I jumped out of my bed, put on my jogging shoes,
My wife woke up saying, what are we going to do

Email ThisBlogThis!Share to TwitterShare to FacebookShare to Pinterest
Labels: religion and mythology, songs about running