Running on Screen (13): A running row in Eastenders 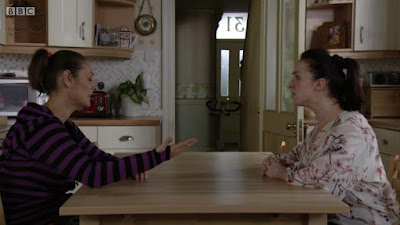 Sonia and Tina are having relationship problems on BBC soap Eastenders. Well, in true Walford style Sonia's ex is struggling to look after the newborn baby that he wrongly believes he has fathered etc etc. But there's more - Sonia is just doing too much running! Last Thursday's episode (18 February 2016) starts with this sulky exchange:

Tina: 'Not running then?'

Sonia: 'No, not till later'

S: 'Why don't we do something together this afternoon, come on it'll be fun'.

'Ok, as long as it doesn't involve running'.

In a bid to smooth the waters, Tina gets a secondhand exercise bike, telling Sonia:

'I got that because I thought maybe you could train at home instead of being out all the time'.

Eastenders prides itself on its well researched storylines, but would Sonia, training for the Walford Half Marathon, really have simpered 'You got that for me?'

Surely Sonia would actually have said: 'A bike? Haven't you read Pfitzinger & Douglas 'Advanced Marathoning'? 'To get a similar workout to running requires about three times as long on a bike. Because cycling is highly repetitive and uses a limited range of motion, it presents a danger of shortening your stride'. I mean what were you thinking?' 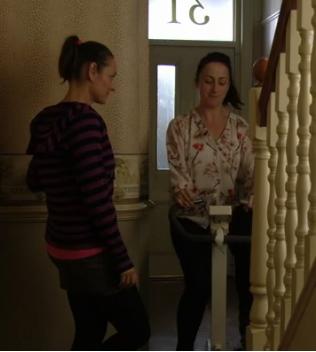 Email ThisBlogThis!Share to TwitterShare to FacebookShare to Pinterest
Labels: Eastenders, running on screen