'Once upon a time the Wombles went to live on - or rather under - Wimbledon Common in South-west London. There may be other Womble families in different parts of the world - in fact there are - but the Wombles like to keep to themselves, so once they've made a move and built themselves a comfortable waterproof burrow they tend to stay where they are...
off went Tomsk, running across the golf course with his arms tucked into his sides and his head well back, just like a four minute miler. He vanished over the skyline'
(The Wombles by Elisabeth Beresford, 1968)

So that was this year's Surrey League cross country champs... The last race of the 2015-16 season, for the Division One men at least, took place on Wimbledon Common on Saturday. Kent AC (my club) won the match and, for the 4th year in a row, the League- headed on the day by Team GB Under-20 International Alex Yee, with club colleague John Gilbert  in 2nd place. Paskar Owor came 3rd, making him the leading runner across the season. He will be sadly missed from Division One next year as his club, Belgrave Harriers, were relegated to division two by a one point margin. Hercules Wimbledon were second place on the day and in the League overall.

The men's League includes 37 clubs across four divisions, and the women's League is also going from strength to strength. Their final match at Richmond Common had 382 runners from 38 clubs in the combined Division One/Division Two race. Steph McCall (South London Harriers) won by a 47 second margin in a field that also included the second fastest UK women's marathon runner of all time - Mara Yamauchi, running for Thames Hare and Hounds. Clapham Chasers won Division One, and of course I was delighted that Kent AC won Division Two and promotion to the top flight (full results and tables at Surrey League website)

'Look, look, look,' shouted Bungo, running down a slope and turning to glance over his shoulder at his own prints. 'Look, look, look' called Alderney, and she put down her her head and went head over heels, leaving a funny bumpy track behind' (The Wombles by Elisabeth Beresford)

Wimbledon Common - one of the birth places of cross country club running - has a number of different courses, Saturday's taking place over the one associated with Hercules Wimbledon. These trails across the common are of  course invisible in between races, but a few markers and a handful of marshals are all it takes to demarcate the route.

Conditions on Saturday were cold with light rain, spikes were essential on some of the muddier sections on the lower slopes, but uncomfortable on the harder gravelly tracks nearer the top of the hill. There is a track across the Common called Gravelly Ride and that says it all. All of this is a function of the geology of what is officially designated as a Site of Special Scientific Interest on account of its varied natural habitats: 'The high plateau in the east and north of the site has a capping of glacial gravels overlying Claygate Beds and London Clay which are exposed on the western slope of the Common. The acidic soils, and poor drainage of the plateau give rise to a mosaic of wet heath and unimproved acidic grassland. Semi-natural broadleaved woodland covers the deeper, clay soils of the western slope...Several streams rise at the boundary of the gravels and clays' (Natural England). So if your spikes were crunching on the gravel, blame the ice age.

There were three narrow stream crossings (one with bridge) and a tree trunk to leap, not to mention a post which one of the Kent runners (Owen Hind) crashed into at high speed. 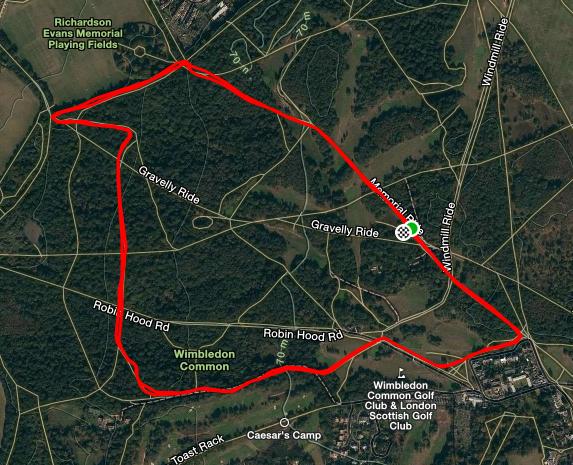 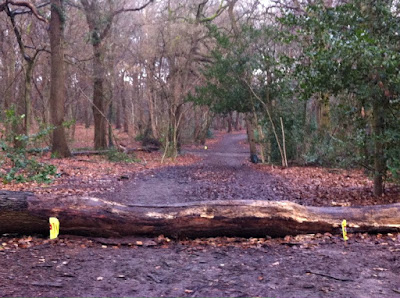 'In spite of all their training on Wimbledon Common, he and Orinoco were not nearly as fit and tough as the members of the Clan, who could scamper up and down the mountains all night without getting tired' (The Wandering Wombles by Elisabeth Beresford, 1970)

I finished towards the back end and it was a bit lonely back there wiith many of my fellow slower runners either injured or absent. Still I was pleased to have shaken off some of my sluggish recent form, and in fact my time was two minutes faster than when I ran the same course in the South of Thames XC last season.

It's really only through running that I've become familiar with Wimbledon Common in the last couple of years- this year three of the four Surrey League Division One races for men were held there. Prior to that the Common for me was simply the legendary location of the Wombles stories, the furry recyclers of my childhood. Children's author Elisabeth Beresford conceived of the Wombles while walking on the Common.  No Wombles were spotted on Saturday, though they have popped up at the Wimbledon Half Marathon in the past.