Tear down the fences - a warning before the Hillsborough disaster

Earlier this year a jury finally confirmed what many had been arguing for years - that the 96 Liverpool FC fans who died in the 1989 Hillsborough stadium disaster were 'unlawfully killed' as a result of action and inaction by the police and football authorities. I wrote about this in a previous post, looking at how the events were viewed by fans at the time.

The following article is also from that period, but what makes it particularly significant is that it was written in the year before Hillsborough. Its warning that fences around pitches prevented spectators escaping from crushes, fires and other dangers was sadly proved all too correct. It is doubtful if anyone would have died in Sheffield if they hadn't been penned in behind fences.
The article was written by later BBC radio journalist Adrian Goldberg for the football fanzine Off the Ball in February 1988, and was reprinted in Reclaim the Game, newsletter of the  Football Supporters Association in May 1989, immediately after Hillsborough (Goldberg was the West Midlands Chair of the FSA). 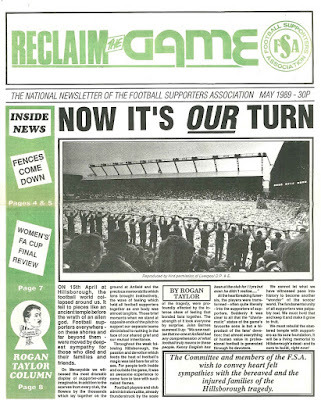 The 1971 Ibrox disaster was the fourth serious incident in ten years on the stadium's Stairway 13. Only the deaths of 66 people could prod the authorities into action, leading to the 1975 Safety of Sports Grounds Act.

The effectiveness of that legislation can be measured by the 56 deaths at Valley Parade just ten years later; as at Ibrox, warnings about the state of the ground were ignored until it was too late.

But the lessons of the past leave no room for complacency. Common sense and the evidence of previous tragedies tells us that at least one element of modern safety measures - the increasingly prevalent fencing-off of crowds from pitches - actually puts supporters at considerable risk.

This dangerous practice could have been fatal once already this season, at Grimsby's Blundell Park. During the home side's Cup tie against Halifax a fire warning was announced in the Osmond Stand (part seats, part terrace). Supporters evacuated in an orderly way, but squeezing them all through the gates in the ‘safety' fence took about eight minutes.

Survivors of the Bradford fire commented that if there had been fences in front of their burning stand fatalities would have been even higher; so it's hardly scaremongering to suggest that another disaster could have occurred at Grimsby. Fortunately, on this occasion, the fire was not serious; but if a tragedy had taken place, ignorance would have been no defence. In the “Green Guide' which accompanied the 1975 Safety of Sports Grounds Act, it clearly states that the best place to evacuate everyone is the pitch, so there should be no security fences in front of seats.

The good sense of that advice was amply proved again at this seasons Notts County v Preston match where a generator overheated behind the main stand. Fearing fire, fans streamed quickly onto the fence-free pitch and were immediately safe.

Indeed, the only mystery is why the authorities' advice about fences should be restricted to seats; for the dangers of entrapment are just as great for terrace fans.

In the 1984 League Cup semi between Walsall and Liverpool, for example, a safety barrier collapsed in the Liverpool end. As the terrace was so packed, fans had only one way to fall- forward. Fortunately,  there were no fences and they spilled harmlessly onto the playing area. Without that safety valve fans would have either been crushed or pushed into other areas of the crowd, leading to undue pressure on the remaining barriers. If, in turn, one of these had collapsed, a deadly domino effect could have been set in motion; just as happened at lbrox.

Much of the problem lies in the authorities' refusal to act on the evidence before them. The Popplewell report of ’86 noted that when Liverpool followers charged Heysel's Block Z “it resulted in the ltalian supporters...who were seeking to escape towards the perimeter being squashed and suffocated by the press of large numbers."

Many of these deaths may have been avoided had the perimeter fence not caused such a formidable obstacle - wire mesh over six feet high, which could only be opened from the pitch side,  with a brick wall beyond that. Psychologically as well as physically fans were being warned off entering the playing area.from recommending the complete abolition of such fences.

Fortunately, most English and Scottish League grounds are sturdier than Heysel and many have been improved since 1985. One of the more logical recent innovations has been ‘penning' whereby relatively large areas of terracing are divided into smaller sections. This ensures that if a stanchion collapses or violence occurs its effects are limited.

Small wonder that supporters panicked, and brought the wall down; yet Popplewell shyed away

So far so good; but the actual practice of penning, especially at grounds with cages, only exacerbates the problems fans face. Take the example of Stoke City. Their allocation to standing away fans is an enclosure in two sections running hall the length of the pitch. Each of these caged-in pens holds about
1,200 fans, but normally only one is open. Thus when West Brom. took about 1,500 terrace followers to the Victoria Ground this season, there was a period of potentially dangerous overcrowding. Under fence-free conditions, Albion fans could have escaped onto the pitch; at Stoke they just got crushed until the second section was opened.

Many clubs ape these tactics, utterly defeating the ‘safety' aspect of penning which is meant to prevent a dangerous concentration of fans in any one area. In these circumstances fences make a bad situation worse.

The nature of their construction also contributes to the danger. Stoke, like many other grounds, has fencing which obstructs the game to such an extent that fans straining to catch a glimpse of the action can’t help but push the person in front of them.

Oxford United, realising the dangers inherent in allowing fans half a glimpse of the game, have taken 'safety' fencing to its logical limit, obscuring all parts of the field for many customers for the full 90 minutes.

A Portsmouth fan who'd brought four £10 tickets had the cheek to think he and his family were entitled to a decent sight of the match - so he took Oxford to court. He was completely outwitted by the brilliant defence put forward by Oxford's Managing Director, Bernard Dalton who explained. “If I did not sell seats which have a difficult view, 8,000 would have to be withdrawn.”

In other words a rip-off is alright, so long as it's a big rip-off. The argument found favour with the judge, who accepted that the Pompey fans' view had been substantially impaired, but awarded the case to Oxford on the grounds that fences were a necessary safety precaution. (An opinion obviously shared by the local authority, since they had insisted on these monstrous erections in the first place).

But whose safety? When some idiot let off a CS gas canister at Easter Road this season,  were fleeing Celtic fans endangered by being able to run on the pitch? Would they have been safer panicking i n a space confined by fences? Of course not. Yet the FA’s choice of Villa Park(rather than Highbury) for last season's Spurs v Watford Cup semi-final was justified thus by Ted Croker: "Villa Park has exceptionally good facilities....Highbury has no fencing.”

But that should be no surprise; the FA's own family section for Wembley internationals is obscured by mesh. Taking their lead from the top, clubs such as Chelsea and Millwall are busily educating the next generation of armchair supporters by placing similar blights in front of their junior members’ areas.

And for what? Certainly not supporters’ safety as we have seen. Nor can it really be for crowd control. Many grounds at the highest level - Arsenal, West Ham,  and virtually all of Scotland’s Premier Division - are fence-free. Yet the clubs concerned don‘t find that assaults on players or pitched battles are a weekly occurrence.

Indeed, many of the worst incidents of recent times at English grounds have taken place in spite of perimeter fencing: Millwall at Luton, Birmingham v Leeds, Chelsea v Sunderland. Fences which are formidable barriers at times of panic and confusion proved to be little deterrent to the determined hooligan.

To be sure, pulling down the fences might lead to more pitch invasions, and even fighting - which is bad publicity for football. But at least the aggro usually involves only those who want to be involved. The mania for fencing, on the other hand, is most dangerous of all to those whom it is presumably meant to protect; the innocent, peaceful football fan.

Tear them down now, before another club has to echo the words of Bradford‘s Stafford Heginbotham: “There are a number of things we all wish had been done prior to this terrible tragedy."
Posted by Neil Gordon-Orr at 06:00