Running conditions were good for the River Thames Half Marathon on Sunday October 30th 2016, dry and cool but not cold as the mist lifted from the river at the start by Walton Bridge. The race, organised by Roy Reeder's River Thames Running, featured a field of more than 1700 runners on a course centred around the river at Walton-on-Thames, in Surrey just to the west of London. 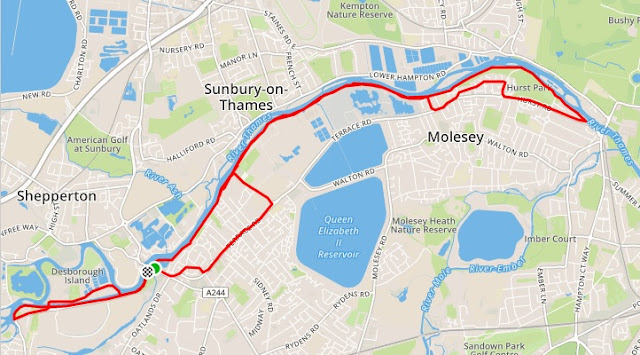 The first two miles of the course are on road/pavement in surrounding streets, before joining up with the river path and heading east. Opposite Bushy Park/Hampton Court across the Thames, the course turns back and follows the river bank west for a good five mile stretch before a final loop brings you back to the start/finish. 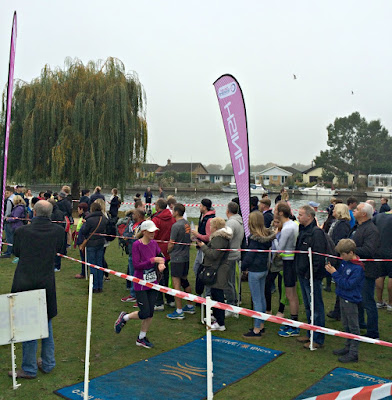 So more than half of the route is directly on the river towpath, a mixture of tarmac and gravel, quite narrow in places which can make overtaking a challenge - or on the positive side make it harder to be overtaken. It's a nice stretch of the river, with locks, boats and lots of rowing (the route passes directly in front of Molesey Boat Club). Best of all the course is more or less completely flat, unless you count a couple of bridges.

Seven ran from my club, Kent AC, with Che Compton winning first vet prize with his 11th overall position. At least five of us got good PBs I believe, I was pleased to take more than a minute off mine, finishing in 1.37.10.

Overall winner was Bedford's James Hoad in 1.10.16, while first woman was Becky Atkinson of Clapham Chasers in  1.20.11. Both set course records, in this the third year of the event (full results here)

It would have been a perfect race but for taking a tumble at the end. I was given it my all on a final dash to the finish when I tripped and landed with a thump on the hard gravel only about ten metres from the line. I got up and finished, but with cuts/grazes to head, shoulder, knee and hand. Nothing too serious, but quite painful and enough blood to be told not to come into the ambulance as I would make too much mess! 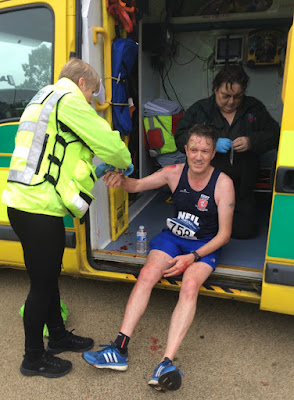 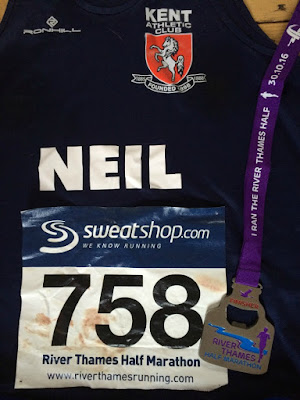 Blood, sweat and beer - nice medal doubling up as a bottle opener, I needed a drink after that.
Posted by Neil Gordon-Orr at 11:30