Nunhead Cemetery in South London is a pleasingly decaying Victorian burial ground, first opened in 1841. At one time it was quite the place to be buried, but by the mid-20th century the burials dried up and the company running it went bust. It quickly became overgrown and by the 1980s the trees that had sprung up had matured into a fine woodland. Since then the combined efforts of Southwark Council and the Friends of Nunhead Cemetery have tried to prevent further damage to the graves and monuments, and make it accessible as both a wildlife reserve and a place of remembrance. 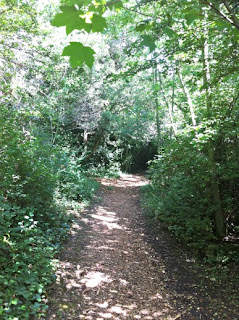 It's a popular spot with runners, as well as dog walkers, as it offers the experience of running through the woods in a place only a short distance from urban inner London. On hot days like we've had recently, it's also cool in the shade of the trees. And the angels and other monuments undoubtedly add an atmosphere of sweet melancholy. 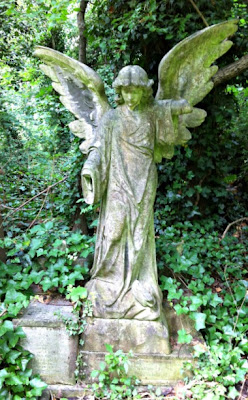 You won't be able to do much reading of the gravestones while you're running, but it's always interesting to have a walk around before or after. Don't get too gloomy, but it does function as a kind of memento mori - one day your running days will be over. As the grave of Hannah Frisby (d.1921) says: 'Life's race well run, life's work well done, life's crown well won, now comes rest' (a verse by Edward  H. Parker that was used on the 1881 funeral casket of assassinated US President Garfield, and then became a Victorian/Edwardian favourite).

Is it actually OK to run around cemeteries? If Martin Creed is right that running 'is the exact opposite of death' might it offend some people? Maybe I would think twice about running around a modern cemetery full of the recently bereaved, but in a place where most people have been dead for over a hundred years it feels more like an affirmation of the continuity of human existence. The torch has been passed on, and will be passed on again.  'A dreaded sunny day, So let's go where we're happy, And I'll meet you at the cemetery gates'

Route: the most straightforward route is round the main pathway. Come into the cemetery from main entrance on Linden Grove SE15, take the track to the left and keep taking left forks at junctions until you are back where you started. One circuit of this is 1.5 km, and includes a good steepish uphill stretch where you are rewarded at the top with a view of the distant St Pauls Cathedral  through the trees. JMW Turner painted from here before it was even a cemetery. 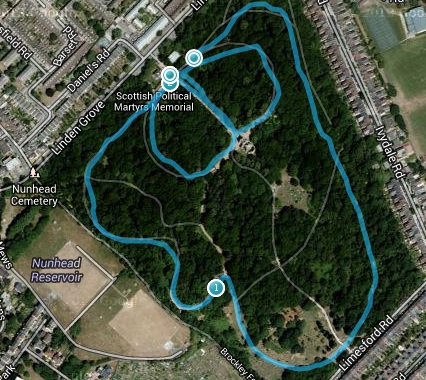 There are other smaller paths and you can create your own longer routes by using these in various combinations. One route I have used is to do the basic loop once, as described above, and then at the end of first lap turn right up the central avenue towards the chapel. At the top turn left, then take the left where the path forks. Turn left again at the bottom and you are back at the start. Carry on towards the Scottish Martyrs memorial, take the left here where the path forks and follow track back round to the chapel. Turn left here and go back down the avenue towards the starting point. That route comes out at 2.4 km.

Terrain: mainly gravel paths, some larger stones underfoot in stretches to watch out for. Paths can get wet/muddy in autumn and winter.

Hazards: Lots of dogs being walked, but most of them friendly!

Opening times: check the Southwark Council website for details. At present it opens at 8:30 am throughout the year, but closing times vary from 4 pm in the winter to 7 pm in the summer.


Post-run refreshments: Dish and the Spoon on Cheltenham Road (near to back entrance of cemetery) and Bambuni on Evelina Road both do really good coffee etc. If a fry up's more your thing, Crossway Cafe (also on Evelina Road) is the place to go - they do a formidable vegetarian breakfast.

Oh and here's a song made up of lines taken from Nunhead graves (including 'life's race well run):