The Lark in the Morning - running over Blow's Downs in Dunstable

'In the golden lightning
Of the sunken sun,
O'er which clouds are bright'ning,
Thou dost float and run;
Like an unbodied joy whose race is just begun'

(To a Skylark by Percy Bysshe Shelley) 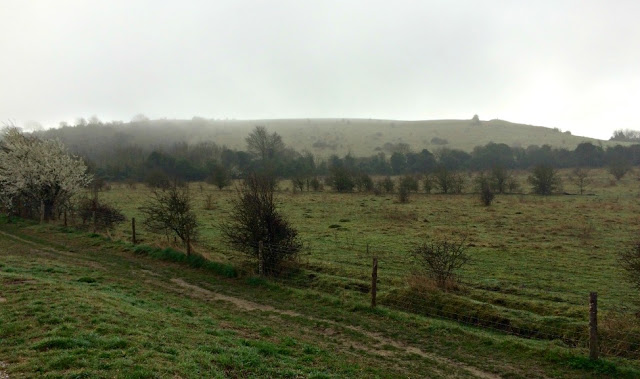 I went for a run last week at Blow's Downs nature reserve, a hilltop unimproved chalk grassland 'site of special scientific interest' overlooking Dunstable in Bedfordshire. I say overlooking but on this particular morning there was nothing to be seen in all directions but fog, making superfluous the sign at the top pointing out other landmark hills which are normally visible including Luton's Warden Hill (which I wrote about here previously). 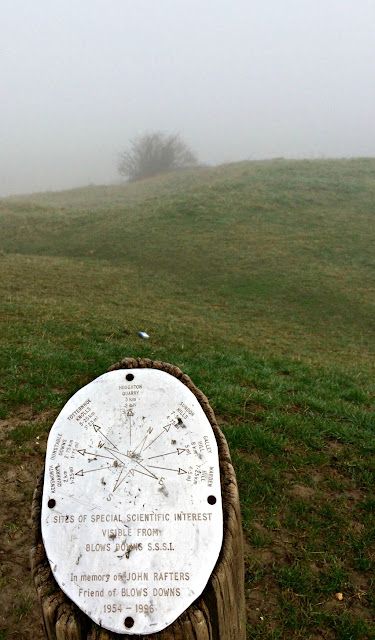 If the town was invisible there was the odd trace of nearby urban reality as a reminder, like the carving on this fallen tree... 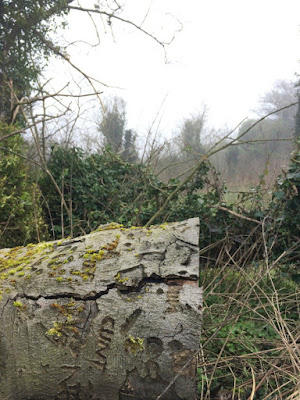 Blow's Down, at the northern end of the Chiltern Hills, is known for its wildlife with its information board mentioning ring ousels, redstarts and wheatears. I had hoped that I might see something interesting – the day before I had watched a red kite circling over nearby down Dunstable Downs. On this morning though the birds too were hidden in the mist. 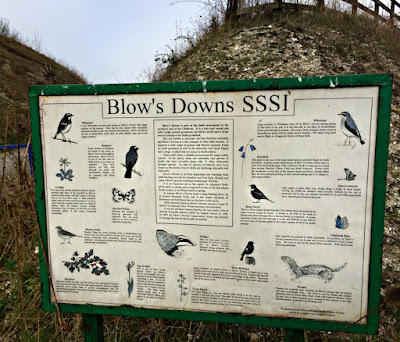 But I could still hear their songs - one in particular as a skylark floated overhead uttering its 'silver chain of sound, Of many links without a break, in chirrup, whistle, slur and shake' (George Meredith, The Lark Ascending, 1881). Yes the skylark is the poet's favourite bird, and maybe every runner too aspires to 'float and run... like an unbodied joy' as Shelley puts it.  Though while running in limited visibility on uneven ground the runner must not lose themselves too much in ethereal thoughts - there is a steep quarry on the hill, and last year a dog walker broke his leg falling down the slope. 'The lark in the morning she rises from her nest', but s/he never loses sight of the ground. 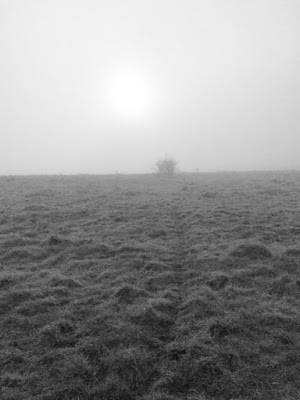 'Alas! my journey, rugged and uneven,
Through prickly moors or dusty ways must wind;
But hearing thee, or others of thy kind,
As full of gladness and as free of heaven,
I, with my fate contented, will plod on,
And hope for higher raptures, when life’s day is done'
(To a Skylark by William Wordsworth) 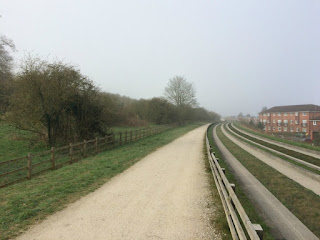 The Luton - Dunstable busway runs along the bottom of the downs, a bus only route with a track alongside it that is great for runners and cyclists.

My Strava route of Downs plus busway run

(The Lark in the Morning is of course an Irish folk song, I used to be part of a folk music session that performed it every Sunday afternoon in a pub near Elephant and Castle back in the 1990s)