The government 'is consulting on proposals to legislate to put it beyond doubt that local authorities, including parish councils, cannot charge parkrun or junior parkrun for the use of public parks'. This would apply to all Councils in England.

Parkrun has grown to be massively popular in the past few years, with free, volunteer-organised 5K runs taking place in parks all over the country and now internationally. Most local Councils have seen the benefit of this in terms of encouraging use of parks,  promoting healthy exercise and building communities (not to mention generating income for the Council indirectly through runners spending on car parks and cafes).

However there was controversy last year when Stoke Gifford Parish Council (in the Bristol area) insisted on charging parkrun for the use of Little Stoke Park which it had previously allowed to be used free of charge.  Parkrun cancelled this event, anxious not to set a precedent which could lead to cash-strapped councils round the country levying charges and therefore potentially undermining the model of free events for runners.

It is precisely to prevent this eventuality that the government is now proposing to explicitly prohibit councils from charging for Parkrun. The paper 'Running Free' argues that charging for such activities undermines the  'the long tradition of the free use of public parks. Our public parks and green spaces are, at once, places where individuals and groups can to go to for exercise, to relax, to enjoy being part of a community, or to find peace and solitude'.


This is very welcome. It does however raise some quite complex questions. Firstly other sports routinely pay for the use of parks, such as hiring football pitches, and there is no proposal to change this. The consultation paper draws a distinction here on the basis that with parkrun there 'is no exclusive use of the park. Parkrunners share the park with other members of the public during the parkrun. This is quite different to the use of a facility in a park that is subject to exclusive use such as a tennis court, or even a facility such as a football pitch that is exclusively used by groups of players at certain times of the week'.

But what about other runs in parks? Most other events do charge an entry fee and/or generate income for the organiser. On this basis the Government argues that they are distinct from parkrun and whether to charge for them would be left for local Councils to decide.

The Government leaves open as a consultation question whether there 'Is there any specific activity, in addition to parkrun or junior parkrun, that takes place in a public park, that does not require exclusive use of the park or a part of the park, that should be considered for inclusion in provisions to prevent local authorities charging for that activity?'.

It would seem unusual to give legal exemption to one organisation in this way, in this case limiting exemption to events organised by parkrun UK. At the moment and for the foreseeable future parkrun is the main organiser of these kind of events, but that may not always be the case. In principle if a group of people wanted to organise something similar - i.e. a weekly free run in the park- but did not do so under the parkrun umbrella, should they be financially penalised? It would be far better to establish the principle at this stage of free use of parks for runners where there is no exclusive use, no charge and no profit. Activities of a similar kind should be treated in the same way, regardless of who is organising them. For instance I take part in Assembly League races held in a number of London parks. These are free to enter, do not have exclusive use of the parks and are low impact - once or twice a year in each park and all pretty much over in half an hour. I believe we have never been charged for this, but this summer for the first time Wandsworth are charging us for the use of Battersea Park. I think this should be treated in the same way as parkrun.

I have seen criticism elsewhere  of the principle of making what is in effect a private company – Parkrun Limited – such a special case. Having looked into the company structure of parkrun – which anybody can do with the records online at Companies House – I think the company status is a bit of a red herring. Parkrun is a company limited by guarantee which means that any profits get ploughed back into it work. No dividends are paid out to shareholders – it is in effect a not-for-profit company, though parkrun's website could perhaps be a bit clearer about this. Some people assume it is a charity while others think that it is a profit making vehicle on the backs of which some are enriching themselves. Neither is true.

Another interesting point is whether Councils have the power to prevent parkruns happening. Looking around London it is obvious that some Local Authorities have actively encouraged the development of parkrun, including providing start up funding.  Southwark Council for instance hosts four parkruns in its parks (Burgess, Southwark, Dulwich, Peckham Rye). Wandsworth Council only hosts one, in Tooting, and this was only agreed after a long local campaign. The sticking point in Wandsworth was that the Council wanted to charge parkrun and agreed to Tooting only as a special case. If the government proceeds with banning charges does that mean that parkrun could start up in other Wandsworth parks or could the Council put other obstacles in its way?

As well as parkrun, the consultation asks for views on the thorny question of whether activities that involve a financial charge to a client or clients by a professional or business, but do not involve exclusive use of a public park or part of the park... should be considered for inclusion in provisions to prevent local authorities charging for that activity'. This would include for instance fitness groups or paid dog walkers. Some of these are small local businesses, but others (such as British Military Fitness) are big national concerns that make a lot of money from charging users - it doesn't seem unreasonable for them to make a contribution to the upkeep of the parks they use.

It is easy enough for the Government to insist Councils should not charge, but at the same time Councils are struggling to keep parks and other community facilities going because of funding cuts. A recent report found that 'between 2014/15 and 2015/16 local authorities across England closed 214 children’s playgrounds, and when asked about future plans they admitted their aim to close a further 234'. Continuing to deliver free access requires funding as well as law changes.

Nevertheless it is great news that the future of free parkruns looks to be secure and the principle has been restated 'that the use of public parks by the public for everyday use is, and should remain, free'.

The public have until July 7th 2017 to respond to Running Free: Consultation on preserving the free use of public parks.

(a coincidence that they used the same name for this paper as for Seb Coe's autobiography?!) 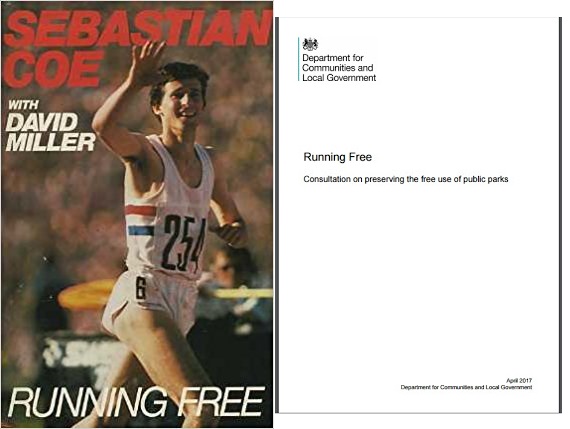