A weekend away in Glasgow for a family wedding saw me looking around for a run, and deciding to given Pollok parkrun a try. Glad I did, it's set in a beautiful country park in the south of the city with the tarmac course winding its way through woodland. The course is decidedly undulating but with no real killer hills and it comes with the bonus of a fast 200m downhill finish stretch through the trees.

The event started as Glasgow parkrun in 2008 (before there were three other parkruns in the city), and now regularly attracts more than 400 runners, with strong attendance from local clubs including Bellahouston Harriers, Giffnock North AAC and Bellahouston Road Runners.

470 took part last Saturday, the largest parkrun I've attended, and I would say if you are chasing a fast time at Pollok park you need to make sure you start near the front of the crowd and go out fast and furious to avoid the early congestion - it soon thins out though. Alternatively don't worry about a few lost seconds and just enjoy the run. First finisher at the weekend was Iain Reid (Cambuslang Harriers) in 16:19 with first female finisher Hilary Robinson coming home in 19:54

The start is near to the Burrell Collection museum in the park, a fine building complete with cafe for post-run refreshments. 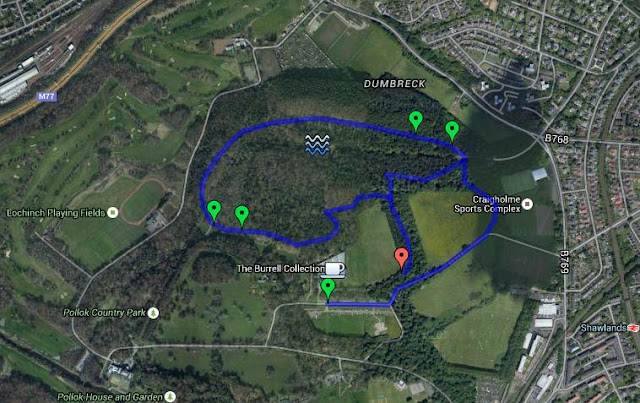 I remember in the 1990s the park was the scene of the Pollok Free State protest camp against plans to build the M77 Motorway across the South West stretch of the park. The motorway went ahead with the loss of thousands of trees. While the remaining park is still large, the episode was a reminder that we can't take the survival of the green spaces where we run and walk for granted. In the same period I visited a similar protest at Crystal Palace park in South London against a building development there - in that case the building did not go ahead, but the threat keeps coming around.

More recently Pollok park featured as part of the route for the 2014 Commonwealth Games Marathon - in fact some of the Australian marathon team took part in the parkrun while they were over for the games.

Hanging out in Glasgow city centre afterwards I caught the Glasgow LGBT Pride parade coming past and was pleased to spot the contingent from LGBT running club Glasgow Frontrunners along with Northern and Edinburgh Frontrunners. 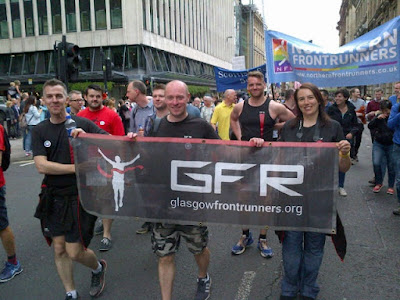