Among his many achievements, Spike Lee is responsible for what I and many others believe to be the greatest opening credits in movie history, as well as the finest fitness/boxing/dance routine in cinema: the first few minutes of 'Do the Right Thing' with Rosie Perez and Public Enemy's Fight the Power. Pure energy and joie de vivre, makes me want to go and run round a track as fast as I can.


This year's NYC Marathon also featured Alicia Keys, who also of course wrote one of the four best songs about New York of the century so far and sang on one of the others (that would be her own 'Empire State of Mind, Part II' and Jay Z's 'Empire State of Mind' - the others being LCD Soundsystem's 'New York I Love You But You're Bringing Me Down' and SBTRKT 'New Dorp. New York' in my humble opinion).

Alicia Keys previously ran a Marathon in Greece in 2007. In a blog describing her New York training this year, she says 'every morning, I get on my running swag, put the baby in the running stroller, and put on my headphones' and listen to audiobooks including Toni Morrison and Malcolm Gladwell.

She was running for her HIV charity Keep a Child Alive: 'This is what inspires me when my body begins to tire. My training is nothing compared to the challenging journey these families face every day. We may not be able to walk a mile in their shoes, but we can certainly run a mile (or 26.2) for their lives and for the forward motion of all the young people who are creating a whole new Africa'. 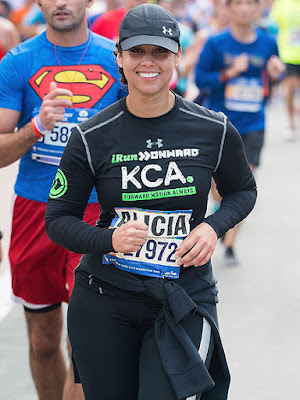