Running on Screen: A Discovery of Witches

'A Discovery of Witches' is a tale of witches, vampires and daemons, starting out in contemporary Oxford where witch-in-denial Diana Bishop is doing research into alchemy in the library. In episode one of the recent TV adaption, we see Diana (played by Teresa Palmer) running and rowing along the river. In a later episode - spoiler alert - we see her being kidnapped by another witch while out for a run and tortured upside down in her best Sweaty Betty gear. 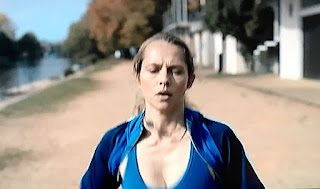 The TV series is an adaptation of the the novel by Deborah Harkness, in which Diana explains that all this exercise helps her manage her anixety - and no doubt burn up some of her excess energy as she initially denies her magical powers. She goes for runs, her feet pounding 'on familiar dirt paths through the fields and marshes north of the city', and takes a yoga class especially for supernatural creatures (a scene not included in TV version).

But it is rowing that is her first love: 'I’d tried medication and meditation, but nothing was better for keeping panic at bay then physical activity. In Oxford it was rowing each morning before the college crews turned the narrow river into a thoroughfare… Rowing was a religion for me, composed of a set of rituals and movements repeated until they became a meditation... as my movements flowed into a seamless cadence, it felt as though I were flying. During these blissful moments, I was suspended in time and space, nothing but a weightless body on a moving river'. 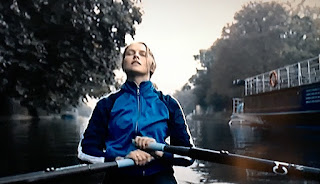 Email ThisBlogThis!Share to TwitterShare to FacebookShare to Pinterest
Labels: A Discovery of Witches, Oxford, rowing, running on screen, Teresa Palmer