Courir ou mourir? (run or die?) - Portrait of a Lady on Fire

There is a scene in Céline Sciamma's 2019 film 'Portrait of a Lady on Fire' where Héloïse, one of the two central characters runs towards the edge of a cliff from which her sister is believed to have jumped and killed herself. As Marianne, her companion and soon to be lover, catches up with her she tells her that she has been dreaming of doing this for years. 'Dying?' asks Marianne. 'Running' replies Héloïse (Mourir? 'Courir' in the French original).

In another scene, Héloïse expresses her determination to get in the sea. 'Can you swim?' asks Marianne. 'I don't know' she responds before getting in and trying. Earlier we see Marianne plunging into the waves from a boat to rescue the tools of her trade as a portrait painter.

Héloïse has recently left a convent and is about to be married off to a man she has never met. In the brief interlude of freedom in between, running, swimming and sex represent an escape from the restraints on the female body, in this case in 18th century France. This liberty is acted out in what the director describes as a short term utopia of 'sorority', an 'all women world' of mutual support away from the male gaze - the film is set on a remote island in Brittany where for the duration of the story at least men are more or less absent. 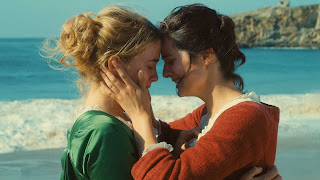 Previous posts on Running on Screen:

Email ThisBlogThis!Share to TwitterShare to FacebookShare to Pinterest
Labels: feminism, running on screen, swimming on screen