Today was the first birthday of Hilly Fields parkrun, with a record attendance of 108 runners braving the September showers.  As noted at Transpontine, 'In the last 12 months, 887 different people have come to the park on a Saturday morning and run 5 km. The combined distance they have run is 17,640 km - which is further than from Hilly Fields to Sydney, Australia'. 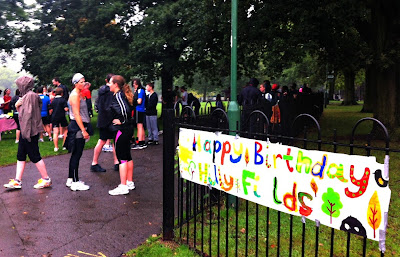 Hilly Fields in SE London  is my home parkrun, where I started and where I run most often. You develop an intimate knowledge of a place by regularly running round it, with your body registering every variation in gradient and your eyes noticing every tree root. As it was the first anniversary though we ran the course in the opposite direction to usual, three anti-clockwise laps, which gave a different perspective. The dreaded final uphill stretch was now a rather slippery downhill grass section. I thought it was a bit faster overall - well it was for me as I got a Hilly Fields PB. 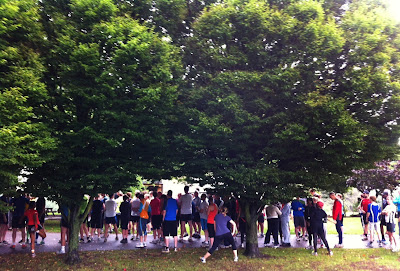 Was a bit miffed not to get fastest in my age category, but then saw that the guy who pipped me (well OK quite a bit more than pipped) was Paul Sinton-Hewitt, the founder of parkrun back in 2004 in Bushy Park. Since then it's become an amazing volunteer-led phenomenon with more than 200 free, timed 5k runs taking place in the UK every Saturday morning and more starting all the time both here and in Australia, New Zealand, South Africa, Ireland, Poland and Denmark. More than 330,000 individual runners have taken part in the UK alone - that's a significant social movement by any standards. 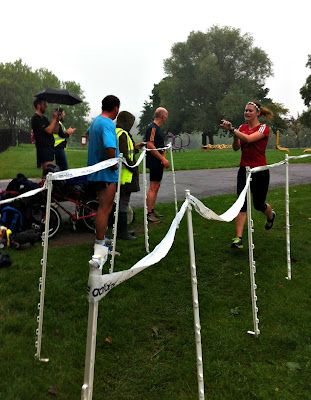 I don't think many people get their fastest 5k at Hilly Fields, the clue being in the name - at its highest point it is 175 feet above sea level. It's more like a hilly cross country course than a run around an urban park track. But it's the Lewisham equivalent of Kenyan hills training and if you run there regularly you will cruise around some of the flatter London courses!

Like many other green spaces, we have to thank the people who saved Hilly Fields from urban development for the fact that we can still run around it. In the late 19th century Octavia Hill and the Commons Preservation Society campaigned against plans to build on what had once been part of Deptford Common (by this point it was a mixture of farm fields and a brickworks). They organised a fund with contributors including William Morris and Jewish philanthropist F D Mocatta, with the park being officially opened in 1896.

Hill wrote in 1888: 'These fields lie within moderate distance of the large, poor district of Deptford. If ever I happen to see a glass of wild flowers in the homes of the people there, I am invariably told that they were gathered in the Hilly-fields, probably on the Sunday afternoon's walk. What a source of pure, healthy enjoyment and refreshment such a walk is to those living in a neighbourhood like Deptford'. And yes, many of us walk and run there still.

Prendergast girls school is in the middle of the park, previously Brockley County boys grammar school and before that West Kent Grammar School. No doubt generations of school kids have run cross country around it. A more recent feature is the stone circle, erected for the Millennium in 2000. When it first appeared I thought it was a bit Spinal Tap - remember the bit in the film where they have the model Stonehenge on stage? But now it feels an organic part of the landscape, and yes I have watched the sun rise over Lewisham from there on the solstice! 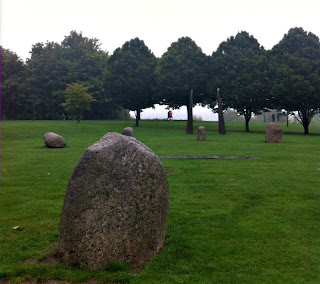 The park also has lots of musical connections, including  a couple of songs of its own: the 1980s cult psychedelic track 'Hilly Fields (1892) by Nick Nicely, and Lucky Soul's 'On Hilly Fields'. A trig point on Hilly Fields was redecorated by locally-based label Angular Recording Corporation, who helped launch the careers of Art Brut and Bloc Party with their acclaimed New Cross compilation in 2003. 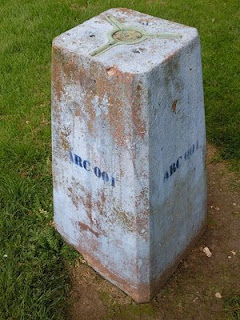 Getting there: close to Ladywell station, 484 and 122 buses go nearby (further details here)

Post-run refreshments: Pistachios cafe in the park do great coffee. 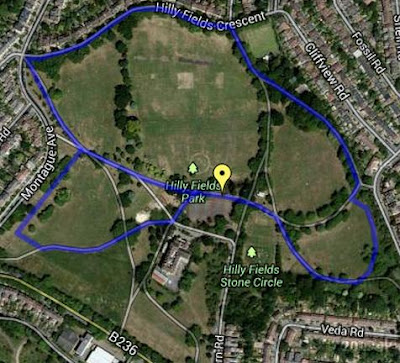