Stars of Track and Field are Beautiful People

I went to see 'God Help the Girl' last week at the Barbican, the new film directed by Stuart Murdoch - lead singer/songwriter of Belle and Sebastian. Unsurprisingly it navigates a similar emotional and physical geography to his songs - music-obsessed troubled teenagers/twenty somethings stumbling through love - requited and unrequited - while getting the band together in Glasgow, particularly its western parts. All with a soundtrack of sweet melodies and intelligent lyrics, and indeed at one point the lovely baritone of Neil Hannon. It stars Olly Alexander, Hannah Murray (Cassie from Skins) and Australian actress Emily Browning.

Well that certainly pushes all my buttons, Belle & Sebastian are one of my all time favourite bands, I am partial to musicals (even 'Sunshine on Leith' brought a tear to my eye), and I have this romantic thing about Glasgow despite never having lived further north than Luton. On family holidays as a kid we always stayed with my auntie in Easterhouse, but my dad lived in Dowanhill Street in the city's west end while doing his shipwright apprenticeship at Alexander Stephen's on the Clyde in the 1950s. Oh and it wouldn't be a Stuart Murdoch project without at least a nod to running -  the film shows Emily Browning briefly running in a retro-styled Glasgow University runners vest.

The tune of the title song apparently came to Stuart when he was out running, something he has done a lot of. In fact I would go so far as to say that he has probably been one of the most dedicated runners in music. Others have done a lot of running to keep fit, or have taken up running to try and get healthy after too much rock'n'roll lifestyle. But Murdoch was running marathons when he was a teenager, and kept up running through years with the band, albeit with a period dealing with M.E. when he could barely face leaving the house. According to the band's biography:

'Something of an athlete in his youth, a still-spry Stuart can often be glimpsed today sprinting determinedly around Glasgow...."I think I'm just naturally quite good at [running]" he shrugs. "If my thing was knitting.. or swimming, which it isn't, I would pursue it. It's just the one particular pursuit that I'm quite good at. So it becomes a kind of meditation. When I run I can pretty much forget everything that has gone before. It's a little gap between the day and the night. I particularly love running around five or six o'clock, you can pass the day out of your system' (Paul Whitelaw,  Belle and Sebastian: Just a Modern Rock Story, Helter Skelter, 2005, p.11).


His 2001-2006 journal, published as the Celestial Cafe (2011), recounts tales of running in various cities while on tour: 'My chief joy and escape is running... My energy has been pretty good of late. I've run in Paris, Brussels, Cologne, Malmo, Mainz, Berlin, Zurich. I saw a wild boar in the woods on the outskirts of Zurich at night. That was nice, running through the warm woods at night with just enough light to follow the path'. He describes running through London's Hyde Park in the dark, and in Sheffield the night before a gig, 'a great town to run around on account of the hills and the plentiful network of meandering river and canals, and quiet industrial roads'.

With all these running miles under his belt, Murdoch is something of the bard of the long distance. A 2004 poem, Milano 6 pm, reflects:

I think I know this town
The runners sees everything
Thinks geography is power...'

Then there's the songs. The Loneliness of the Middle Distance Runner includes the line 'Have you seen the loneliness of a middle distance runner, As he stops the race and looks around?', plainly referencing the Alan Sillitoe story/film but perhaps also a reflection on the experience of finishing a race surrounded by loads of people but really having been lost inside your head/body/pain for that final stretch.

'The Stars of Track and Field', from the  great 1996 'If you're feeling sinister' album, manages to make athletics training sound sexy, and is also very funny:

Could I write a piece about you now that you've made it?
About the hours spent, the emptiness in your training
You only did it so that you could wear
Your terry underwear
And feel the city air
Run past your body 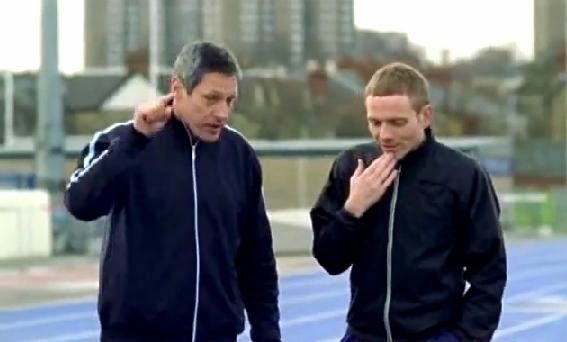 Wells plays Murdoch's trainer, struggling to keep him focused in the midst of a romantic crisis that also sees Murdoch running all over Glasgow. 'Let's see your kit for games.
All the girls look the same.
You are challenging styles for running miles.
You're running miles in some boys jumper'.

I must admit I quoted the last line to my partner very recently after she appropriated my new long sleeve running top.

[update 16 May 2015]
Just noticed another one- (My Girl's Got) Miraculous Technique (2001):
'I know my legs are weak, but if I hear my baby speak, then I’ll start running.
She’s got miraculous techniques'

[update June 2017]
You can now get a rather fine 'Stars of Track and Field' sew on patch from the Belle & Se﻿bastian shop, think I'm going to have find an old skool track suit top to put it on. 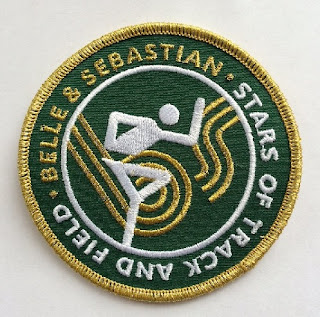 Other musicians in motion:

Running with Madonna
Joe Strummer: Marathon Runner
Morrissey and Marr: The Running Smiths
Viv Albertine (The Slits) on Running
Posted by Unknown at 22:40

Email ThisBlogThis!Share to TwitterShare to FacebookShare to Pinterest
Labels: Belle and Sebastian, Glasgow, God Help the Girl, musicians in motion