The inaugural Crystal Palace Dinosaur Dash Relay this week was a great success, with a sold out field of 82 teams of three (246 runners) taking part. The 15k relay on Wednesday 17th June, organised by Crystal Palace Fun Runners, involved each runner doing a single lap of this great London park.
. Starting on the terraces at the top of the sloping park, where the glass building that gave the area its name once stood, the route wound down to the bottom of the hill... and all the way back up again. Of course it included a circuit of the lake and its famous Victorian dinosaur models, hence the 'Dino Dash Relay', and indeed proceeds from the race will be donated to the preservation of these  fine creatures, one of whom was represented on the event's medal. 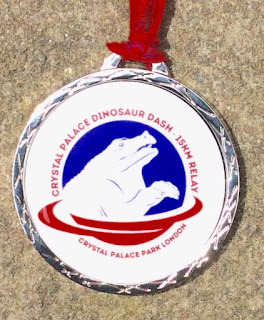 There was a strong presence from local clubs, in particular Striders of Croydon, Beckenham Running Club, Dulwich Runners, Orpington Road Runners and Windrush Triathlon, as well as unattached runners. Many teams entered into the Jurassic theme with dinosaur-related names, and indeed the winning team in 51:47 was Striders of Croydon Velociraptor, followed by Dulwich Runners Malosaurs (full results here). I thought the best team name though was 'I thought you said RUM in the park'.


Save Athletics at Crystal Palace: update

The run showed yet again how important Crystal Palace is to the South London running community. As discussed here before, the park's athletics stadium, outdoor track, and indoor track are all under threat under proposals from the Greater London Authority. Crystal Palace Sports Partnership, which is spearheading the campaign to save athletics at the Crystal Palace National Sports Centre, has warned that 'in July the GLA are looking to grant approval for funding which could decimate athletics in South London, despite a huge groundswell of public opinion'.  Under these plans, the outdoor running track could be saved as a community facility (though even this is not guaranteed)  with the loss of the indoor track and other facilities (despite the support of UK Athletics for retaining and improving current provision).

The use of the wider park for running events like the Dino Dash and the weekly Crystal Palace parkrun could also be compromised by longer term proposals to build on the site of the old Crystal Palace building, which burnt down in 1935 - near to the start and finish point for this week's race. Fortunately for now the latest folly, which would have entailed a Chinese developer backed by the Mayor of London taking over a third of the park, seems to have bitten the dust


The start and finish point for the race was also the same place in the park where The Chemical Brothers 'Setting Sun' video was filmed in 1996. The race was pretty wild, but not this wild...