On the Isle of Islay last month, I did something I haven't done for quite a few years - go out on a decent bike ride. I have never been a serious cyclist, but did used to cycle into work in London until my friend Paul Hendrich was killed on his bike and another friend seriously injured within a short period of time. I gave it a rest and never really started again. Well I've been too busy running...

Islay is a great place for cycling, with fairly good roads, nothing too challenging in the hill department, and of course many great places to see, some of which are easier to access by bike or on foot than by car.  There's not a lot of traffic and most of the drivers are fairly friendly and accommodating - certainly by London standards. Though as I mentioned in my Islay running advice, most of the roads are single lane and you can encounter some large farming and distillery vehicles - so whether cycling or running, etiquette and safety dictate you pull over and let them pass.

Islay has a good cycling infrastructure, starting with plentiful information. Prolific cycling blogger Brian Palmer (The Washing Machine Post) lives on Islay, so go to his blog and click on his 'cycling on Islay' link for everything you need to get you started.

I guess most serious cyclists bring their own bikes, unless visiting from far off shores, but it's easy enough to hire a bike on the island. We hired a couple for the day from Jim Lutomski's  Islay Cycles in Port Ellen. 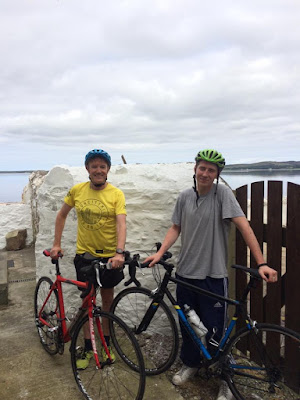 There's an active cycling group on Islay - known as the Velo Club d'Ardbeg, you can claim your membership by the simple act of buying one of their fine cycling jerseys from Ardbeg distillery (or from cyclejersey.com). 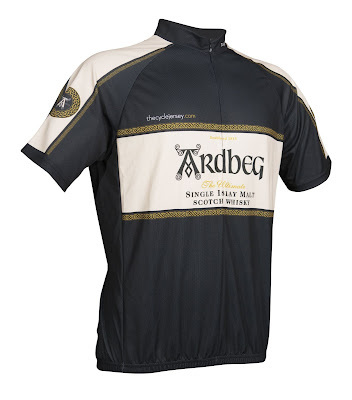 They meet for a Sunday morning ride at around 9:30 at Bruichladdich Mini-market (known as Debbie's), and welcome visitors to ride with them. Me and (my son) Billy joined them for a circuit from Bruichladdich taking in Loch Gorm with plentiful vistas of green, grassy Islay. We did around 18 miles in an 80 minute session, with the ride to and from Bowmore to the start/finish I did around 35 miles in total. My physical endurance is OK from running so I didn't have any problems with the distance, but my roadcraft was a bit rusty, as was my ability to sit on a saddle for a long period. Ouch.


The previous weekend had seen 'The Ride of the Falling Rain', a 100 mile or so ride around Islay's roads (that must cover pretty much all of Islay's roads). Apparently it lived up to its name and only a handful of cyclists completed the full distance in appalling weather conditions - in August! Let's just say the weather can be rather variable in the Hebrides, but in the week we were there the sun shone every day. 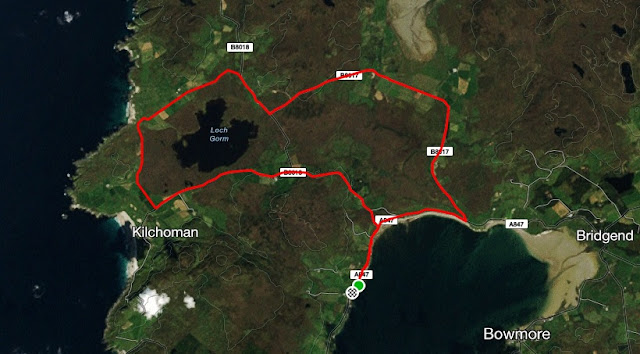 The ride finished back in Bruichladdich, where the Mini-Market serves good coffee and also doubles as cycling club HQ with memorabilia on the wall. 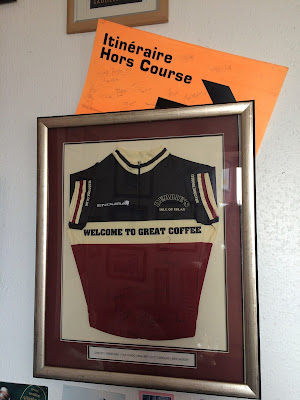 I guess the key learning point  from this adventure was... I need to get a new bike.