When I ran the London Marathon in 2015 I asked friends and family to donate to  Core – the Digestive Disorders Foundation, a cancer research charity that focuses on cancers of the digestive system including stomach cancer which my dad, Dugald Orr, died from. Thanks to everyone who donated we raised over £900 (see previous post about  my dad and my reasons for this choice). 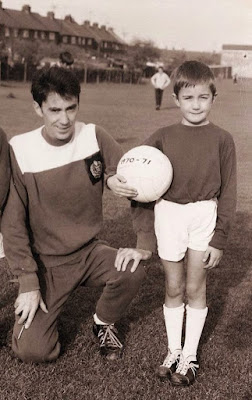 I was pleased to hear from the charity again recently - they told me that they sometimes use a picture of me and my dad in their presentations which was touching. Last week they invited me to the London launch of a new campaign called the Less Survivable Cancers Taskforce  which they have started with a group of other charities concerned with lung, liver, oesophageal, brain, pancreatic and stomach cancer, which make up half of cancer deaths in the UK. A cancer diagnosis is devastating for anybody, but for those with these cancers the prognosis is particularly poor. They have just a 14% chance of surviving for more than 5 years, compared with 64% for more survivable cancers. 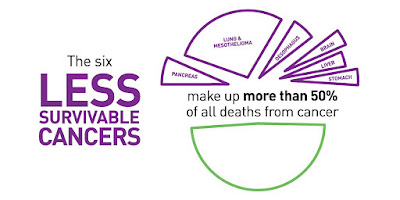 My dad's death in 1997 at the age of 61 came at the end of a period of more than six months of lost opportunities to diagnose his stomach cancer. When he started losing weight and having eating problems he was already in the system for arthritis and his symptoms were initially viewed through the lens of the rheumatology specialists he was seeing at the hospital. He then had an operation for a benign tumour on his thyroid and it wasn't until after this that he was finally given an endoscopy and diagnosed. Within a few weeks he had died -  too weak to cope well with surgery, he never fully recovered consciousness after an operation.

Nobody lives forever, and with the present stage of medical knowledge a magic bullet cure for all cancers might not be on the immediate horizon. But with timely diagnosis and treatment I'm sure my dad could have lasted a few more years, time at least to have met all his grandchildren for instance.

As I head  towards that age myself I find it depressing that in respect of these less survivable cancers there seems to have been relatively little progress in the 20 years since. Hence the need for the Taskforce with its five objectives:

The Taskforce launch was held at Westminster's Portcullis House on Wednesday and featured contributions from people affected by these cancers whether as survivors or as relatives of those who didn't survive. The campaign seems to have some political support, such as through the All Party Parliamentary Group on Cancer, and with clear and achievable aims there is no reason why it shouldn't make an impact.

But improvements for people with cancer cannot be achieved in isolation from the state of health services more generally. If early diagnosis and treatment is a key factor in survival rates, then getting into the system quickly is essential. At present many people seem to be struggling to get to the first hurdle - getting a GP appointment - let alone getting referred on to appropriate specialists.


Here's a few comments from a facebook discussion last week about trying to get an appointment at my local GP practice in South London:


'I've tried every day this week and been variously: cut off after ten minutes on hold (twice); left on hold for an hour; unable to get through at all; getting a "the surgery is now closed" message for a whole day'.

'Few months back I couldn't get an appointment and the receptionist was asking all kinds of intrusive questions. I was in a bad situation and paid to see private at work and I needed to go to hospital for a scan... Even though I answered and told the receptionist I had lumps in my breasts she still wouldn't book me in!'

'have just spent 38 minutes on hold again. Got through eventually and was told they are only taking emergency appointments. They could offer me a telephone appointment in 3 weeks (when I'm on holiday)...  Almost cried with frustration'.

I wish this was just a local problem at my doctors, but talking to other people this doesn't sound untypical - overwhelmed admin. staff﻿ rationing limited appointments. Knowing how hard it can be for many people to acknowledge their symptoms and seek help, anything that deters them from seeing a doctor can only reduce their chances of survival if they are unfortunate enough to be suffering from one of the less survivable cancers.


Primary care needs resources so that people can see their GP - not just money, but a supply of suitably trained and rewarded staff at all levels from receptionists to doctors. Around one in eight GP posts are vacant, and there is a national recruitment crisis: 'Almost one in five practices has had to abandon searching for a new GP as vacancy rates have hit their highest ever' (Pulse, 12 May 2017)


But I would also like to see more self-referral to cancer screening services, with more active surveillance for people at risk. One of the speakers at last week's event put his survival down to the fact that he was on a programme where he was having an endoscopy every six months, so his condition was picked up early. I fear that many, just like my dad 20 years ago, never get near such a procedure until their symptoms are too severe to treat. 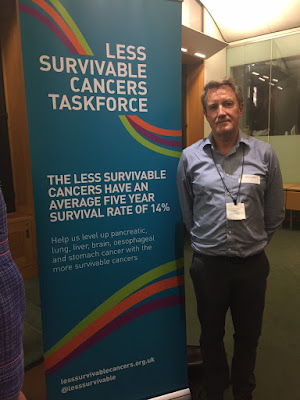