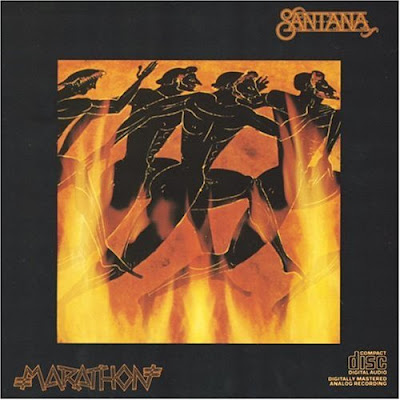 Marathon was a 1979 album by Santana, and the sleeve features some ancient Greek runners. As well as a short introductory title track, the album features an equally short bass driven instrumental called Runnin'.

So was Carlos Santana a marathon runner himself? It seems not, but in the 1970s he was a follower of the Indian spiritual guru Sri Chinmoy (1931-2007), as was his wife Deborah. Chinmoy and his devotees were  very involved in athletics, and  the Sri Chinmoy Marathon Team continue to organise the Self-Transcendence races across the world including in the UK.

While Santana undertook the rigorous Sri Chinmoy regime, including 5:00 am meditation, he drew the line at marathon running: 'This shit is not for me- I don't care how enlightening it is' (source). Deborah Santana did though take part in marathons and ultra-marathons.