Assuming you don't only run on a treadmill or track, running means spending a lot of time in the great outdoors. And that means that in your running you will encounter many birds, whether in city parks or rural wilderness. Of course you might not notice them as you focus on the ground in front of you, your time, your pain, or whatever you are listening to on your headphones, but they are there nonetheless.

I have never been a proper twitcher, but a time in the RSPB Young Ornithologists Club at primary school set me up for a lifetime appreciation of birdlife. And I think that does enrich my experience of being out and about running. In my regular parkrun in Hilly Fields I see the bright green ring-necked parakeets and, at this time of year, the swifts on summer holiday in South London from Africa (OK I tend to notice them more in the post-run state of mild euphoria than when I am chasing a 5k PB). I was delighted to see a beautiful goldfinch as I was on my way to the run last week.


Running around Rotherhithe I see the waterfowl that live in the stretches of water that remain from the long-closed Surrey Docks - there are swans, ducks, coots, moorhen, and, on the nearby Thames, cormorants. I once saw a kingfisher by Surrey Docks Farm.

Running on holiday in Portugal I kept coming across a species of bird that is only found there and in Spain - the Iberian Azure-Winged Magpie. They fly and behave just like the magpies we see in this country, but as they look different I managed to break the lifetime habit of counting them ('One for sorrow, two for joy, three for a girl, and a four for a boy, five for silver, six for gold, seven for a secret never to be told').


Of course some birds are pretty good runners themselves. The roadrunner, found in the southern United States and Mexico, isn't quite as fast as its cartoon representation but can clock up speeds of 20 miles per hour. And if you should happen to come across an ostrich while running (unlikely in South London) don't bother trying to keep up. The fastest bird on land can reach speeds of up to 43 mph (70 km/h) - is using them as pacemakers the  secret of Kenyan running?! 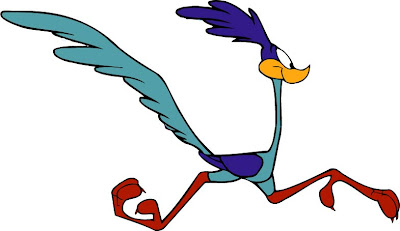 Update, 24 July 2013:  a 10k run this week taking in Dulwich Wood/Sydenham Hill Wood, a paradise of robins, blackbirds, wrens, great tits and best of all on my run a Lesser Spotted Woodpecker. Also saw a heron amongst the dragonflies on  a run along the canal between St Katharines Dock and Shadwell Basin.

11 August 2013: saw a Green Woodpecker while warming up for Richmond Park 10k today.

26 August 2013 : running by the Thames at Purley, a flight of Canada geese alongside me just above the water


22 August 2014: I was buzzed by terns running near their nests of the Isle of Islay 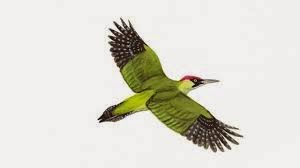