Running in The Railway Children 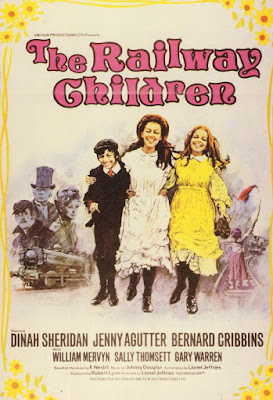 The Railway Children - both  Edith Nesbit's 1906 novel  and the 1970 film adaption of it - feature a paperchase/hare and hounds race in the north of England. As mentioned here before such races, where a 'hare' runs ahead scattering a trail of paper and is chased by the 'hounds', were important in the early history of organised cross country running in the 19th century - hence many clubs retaining the name 'harriers' to this day.

In the story, the hare leads the hounds down a railway tunnel where one of them trips and is injured, narrowly escaping being hit by a train. But it all end's well, as the children look after him and in return the boy's grandfather helps secure the release of their father from prison. 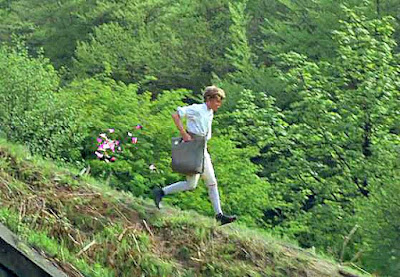 '"Let me pass, please." It was the hare—a big-boned, loose-limbed boy, with dark hair lying flat on a very damp forehead. The bag of torn paper under his arm was fastened across one shoulder by a strap. The children stood back. The hare ran along the line, and the workmen leaned on their picks to watch him. He ran on steadily and disappeared into the mouth of the tunnel...

And now, following the track of the hare by the little white blots of scattered paper, came the hounds. There were thirty of them, and they all came down the steep, ladder-like steps by ones and twos and threes and sixes and sevens. Bobbie and Phyllis and Peter counted them as they passed. The foremost ones hesitated a moment at the foot of the ladder, then their eyes caught the gleam of scattered whiteness along the line and they turned towards the tunnel, and, by ones and twos and threes and sixes and sevens, disappeared in the dark mouth of it. The last one, in a red jersey, seemed to be extinguished by the darkness like a candle that is blown out' (E.Nesbit, The Railway Children - full text here). 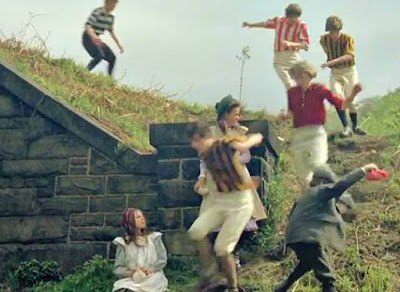 The author (and socialist) E.Nesbit lived in various places in South East London from the 1870s until the First World War including Blackheath, Lewisham (Elswick Road), Lee, and Well Hall in Eltham. I wonder whether she ever saw Lewisham Hare and Hounds in action, the predecessors of today's Kent Athletic Club? They were formed in 1888 and certainly ran paperchases in the period when Nesbit was living in the area.

Jack Kerouac running down a mountain
'These forms who hasten by' - runners on the Pilgrims Way, 1920s
'You just had to run' - Karl Ove Knausgaard
Morrissey - List of the Lost
Burns Night Running Thoughts
A Midsummer Night's Running
Running to Paradise - W B Yeats
The Sky of a Saturday Morning - John Updike
The Road is a Strange Country - Rebecca Solnit
The Runner - W H Auden
Once a Runner - John L Parker jr
Louisa May Alcott - 'A Joy to Run'