Bushy parkrun: a visit to the Mothership

I am approaching my 100th parkrun and surely no centenary is complete without a visit to the place where it all started - Bushy Park, near to Hampton Court in South West London. So last Saturday morning me and J. headed out there in the sunshine for my parkrun no.98.

It was in October 2004 that the first parkrun (then called Bushy Park Time Trial) took place in the park, since when the idea of a free, timed, Saturday morning 5k has spread around the world. A suitably biblical 13 running apostles took part in that first event, and today Bushy Park is something of a pilgrimage site for parkrunners. In fact more than 30,000 individual runners have run in parkrun there, with a regular weekly attendance in the region of 1,000.

The event starts off with the runners arranged along a very wide start-line, rather like at the National Cross Country Championships.After a first charge across the grass the crowd resolves into the usual race dimensions, spread out enough to not be a problem, but with the large numbers meaning runners of all abilities are guaranteed to have people around them for most of the race - a fact that probably lifts performance for many as they get dragged around by those slightly in front. It's a single lap of a flat course too, which certainly helps.

I had expected it to be quite an event, and it was, but I was taken aback by what a beautiful place Bushy Park is - how come I'd never been there before? I heard a talk this week about Green Exercise - the idea that taking exercise in a natural environment brings additional mental well-being benefits (more on this in a later post). Well having a red deer stag chilling out near the start/finish of the race certainly did it for me


The run starts near to the 17th century 'Diana Fountain' by the park's Hampton Court Road entrance - named not for the late Princess but for the Roman Goddess of the Hunt. Despite being known by that name, many historians now think that the statue actually depicts Arethusa. Either will do as a patron of runners, fleet-footed Diana or Arethusa the nymph who ran so fast from the river god Alpheus that her sweat turned her into a stream. 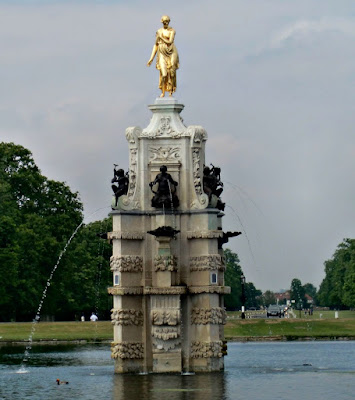 Many runners retire afterwards to the Pheasantry cafe in the park, good coffee in a gorgeous setting.


If you are travelling from further afield, Hampton Court, Hampton Wick and Teddington stations are all within 2 km of the start. If you're driving there are car parks in the park and if you get there early you should be able to get a spot - later they get very busy. Further details at Bushy parkrun. 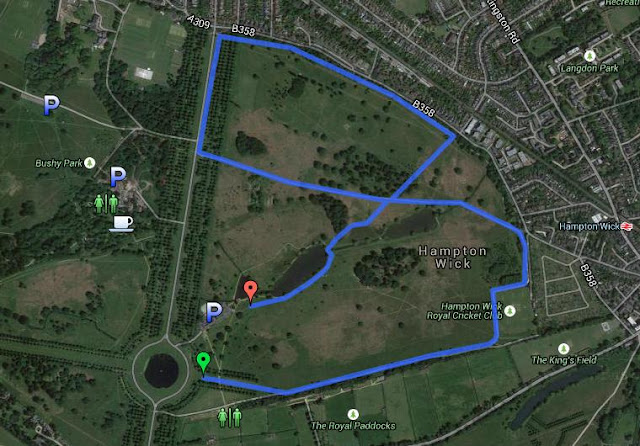