I enjoyed the Clapham Common 10k organised by RunThrough on Saturday, with nearly four hundred runners finishing a three lap course around this flat South London park. I suspect too that it will be my last race in sunglasses this year - a glorious sunny morning on this first weekend after the Autumn Equinox. Dan McGrath finished first in 33:50, first woman finisher was Imogen Aimsworth in 36:43 (full results here). I took a couple of minutes off my PB in my first 10k for two years, so was more than happy.

The start/finish was near to the park's grand Victorian bandstand, which along with the local underground station inspired the event's fine medal 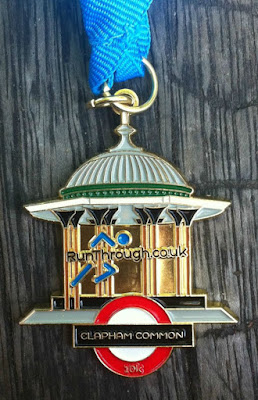 There's always people running round Clapham Common, and a number of local running groups/ clubs use the park regularly - including Clapham Pioneers, Clapham Runners, Sweatshop's running group (from their shop just off Clapham High Street in Voltaire Road) and indeed RunThrough themselves who have a free Monday night session there. 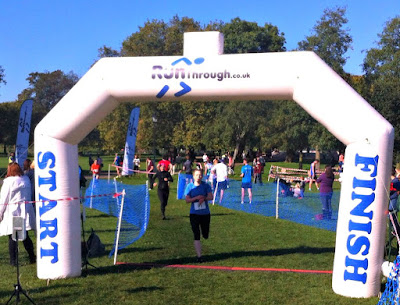 The Common doesn't seem to have quite the rich running history of other South West London parks such as Richmond and Wimbledon - where organised cross country running started out - but it was featuring in races even before it was drained and recreations grounds laid out in the 1870s. This report from 1869 is of a Hare and Hounds race organised by Brixton Football Club. Two 'Hares' - F. Bone and Harry Foster - laid a paper trail across nearly 15 miles of SW London in one hour 57 minutes for the 'hounds' to follow. As well as Clapham Common their run in a loop from Brixton took in Streatham, Tooting and Wandsworth Commons.