Art of Athletics (2): 'For the Unknown Runner' by Chris Ofili

A number of British artists were commissioned to design posters for the 2012 London Olympics, including Chris Ofili who came up with 'For the Unknown Runner'. 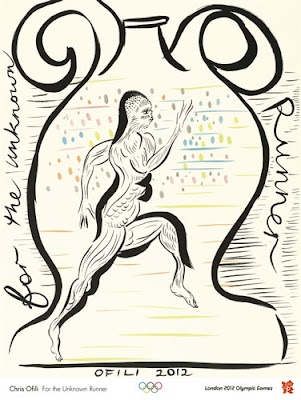 Chris Ofili designed it in his studio in Trinidad. In an interview with film maker Tracy Assing at the time he said that the runner wasn't supposed to represent anyone in particular but 'just the idea of somebody running from something or to something'.  He did though say that he was inspired by an image of Usain Bolt and another of a trophy vase from the ancient Olympics.

Ofili reflected in the film on the connection between running and making art: 'the 100 metre sprint is like flight I suppose, trying to launch yourself into that series of moments but essentially living in the moment where it's one step after the next, and trying to get some way beyond that moment so you are completely free of what you've done at any given instance... I think sometimes trying to make art's a bit like that where you're basically letting go, where you're offering something for that moment and trying to let go and move forward and not be burdened by your own accumulations'.
Posted by Neil Gordon-Orr at 06:00