Talk of the Olympic Legacy will ring somewhat hollow if the second largest athletics stadium in the UK is allowed to be destroyed.  Don Valley Stadium was originally built for the 1991 World Student Games, and has hosted numerous sporting and cultural events since. Most famously it is the home track of Olympic heptathlon winner Jessica Ennis-Hill. She was discovered there on a children's athletics scheme and has trained there for all her big events.


Sheffield City Council announced earlier this year that the Stadium would be closed in September 2013 and then demolished as part of a cost saving exercise, following massive government funding cuts to local authorities. The Save Don Valley Stadium Campaign is mounting a last ditch challenge to the planned closure, including trying to get it listed as a 'community asset' (where the Council would transfer ownership to a community organisation). As Ennis said earlier this year, '"It's a huge shame. To see it demolished would be a massive, massive disappointment... We've achieved so much as a country in the London Olympics, so to lose some great facilities sends out the wrong message, really. I understand budgets and costs, but I think we need to find a way to keep it." 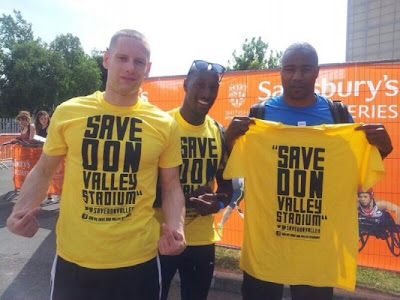 Another Sheffield facility, Woodbourn Road athletics ground, is being revamped and will be run by Sheffield Hallam University, though clearly it won't be on anything like the same scale as Don Valley.

Really it shouldn't be down to one local Council and/or group of local people to take sole responsibility for keeping a facility going that has wider regional and indeed national significance. It is true that there is now the Olympic Stadium in London for international athletic events, as well as the Alexander Stadium in Birmingham, among others. But the vision should be to translate the growing enthusiasm for running into more people wanting to come and see top level athletics, and to have a a network of decent stadiums around the country where big events can be held and young athletes can get experience of running in this kind of environment.