It was the first parkrun in Southwark Park yesterday. A good turn out of 150, with the rain holding off after earlier showers.  I am pretty familiar with the park, having run round it a few times with people from work in our lunchtime runs. The course is flat and fast with tarmac almost all the way round - the 20 fastest runners all finished in less than 20 minutes. Mind you there were some very experienced runners taking part, including three with more than 250 parkruns under their belt.

David White (Croydon Harriers, as well as Southwark Council's Run! Co-ordinator) had the fastest time amongst the men (16:57), and Janet Worster (City Runners) was the fastest woman (19:35). But as usual at parkrun it was an inclusive field with plenty of runners who had never taken part in parkrun before - some of whom will no doubt become the bedrock of Southwark Park as it establishes itself.

As it was an inaugural event, the run attracted quite a few runners from around London and beyond, including Parkrun podcast presenter Danny Norman and a contingent from Orpington Road Runners there to celebrate Zoe Wright completing 50 parkruns (Zoe has struggled with cancer and family tragedies, and writes enthusiastically about parkrun at her blog) 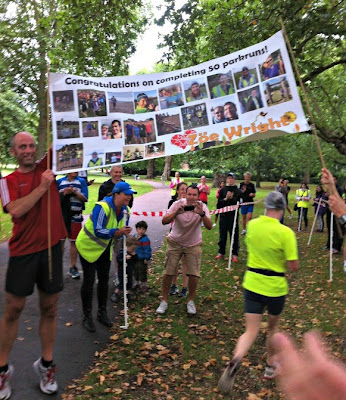 The history of running in Southwark Park

Just south of the river Thames in Rotherhithe, Southwark Park was opened in 1869. It has a long history of athletics, as local historian Pat Kingwell has documented in his Some Races Run: Glimpses of Athletics in Southwark Park. Seemingly in its early days cricket was pretty much the only sport catered for, but from 1890 Cambridge Harriers started having regular running events in the park. The club grew out of Clare College Mission, a philanthropic endeavour involving Cambridge graduates doing charitable works amongst the Bermondsey poor - the Dilston Grove art gallery in Southwark Park was formerly the Clare College Mission Church. Cambridge Harriers Athletics Club continues to this day , though now based in Bexley and training in Eltham.

By 1898 Cambridge Harriers events were attracting crowds of 2000 to the park and in 1903 they had a membership of 150 runners. In October of that year, in his annual report to the London County Council, the Park Superintendent James White commented that athletics was thriving on Monday and Wednesday evenings and early mornings from 6am, the latter “mostly men employed in the printing trade.”

Also in 1903 another club, St. Katherine’s (Rotherhithe) Harriers, were holding meetings in the park which attracted 2000 spectators to the oval - the cricket ground area sometimes used for athletics. In July of the same year, Southwark Schools Athletics festival attracted over 1800 child participants in a day-long event, watched by 8000 people. School sports days continued in the interwar years, as well annual Children’s Sports and Gala Days throughout the 1930s organised by the Bermondsey and Rotherhithe Trades Council and the Bermondsey Labour Party at the time of the May Day celebrations.

The park was close to the Surrey Docks and to the factories of Bermondsey, so the privileging of cricket over other sports such as football and running can be seen as disadvantaging local working class people. Even when athletes were allowed to use the cricket oval for training, rules stipulated that this was  'provided he is attired in proper University costume' (1898).

In the late 19th century Cambridge Harriers campaigned for a dedicated running track in the park, and in 1910 the Southwark Park Improvement Committee (which included representatives of the dockers union) took a deputation to the London County Council calling for an athletics track. These demands were rejected, and it was not until 1980 that a running track was finally opened in Southwark Park. The following year the very first London Marathon route included a diversion through the park, though from 1982 this was changed so the route goes past it rather than across it. 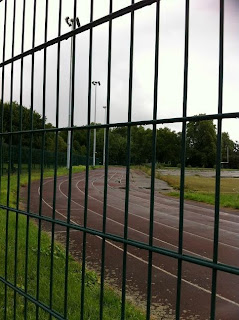 Today the track is in disrepair, though plans are being developed to refurbish it. The park is having a bit of resurgence as a running venue, with London City Runners now training there and a 10k taking place there next month - all this plus the new weekly parkrun which will no doubt go from strength to strength.

Getting there: Parkrun (every Saturday, 9 am) starts at the corner of the park nearest to Surrey Quays station (London Overground); Canada Water, Bermondsey and Rotherhithe stations are also nearby to the park. Local buses 47, 188, 381, C10 and P12 all stop near the Jamaica Road entrance.

Post-run refreshments: there is a cafe in the park, never seen it as busy as yesterday. There also various cafes just across the road in Surrey Quays Shopping Centre, including one in Decathlon Sports.

Blog7t has another report of the Southwark Parkrun with lots more photos: http://www.blog7t.com/2013/09/southwark-parkrun-inaugural-event.html