Extracts from an article on  'CROSS-COUNTRY RUNNING' by R.R. Conway, published in 'The Badminton magazine of sports and pastimes', May 1898. Interesting 'classes' versus 'masses' angle in opening paragraph - assume by 'classes' the author must mean the 'respectable/better' classes.

'Cross-country  running is essentially the sport of the masses. The classes either pass it contemptuously by on the other side, or judge its votaries by the attenuated and lightly clad specimens of humanity who may be seen scampering round suburban roads in the gathering darkness of a winter Saturday afternoon. But we cannot help regarding it as a most important branch of athletics. Nearly all our best distance runners train regularly across country in the off season, and while our sprinters go down before the flying Americans, and our jumpers are outdone by the nimble Gael,  we can still claim an undisputed supremacy at the longer distances, and it is across country that the majority of such contests are decided.

A late prominent paper-chaser, at Cambridge, has rather happily described the sport as ‘a man
running as nature made him', for the description is just. Nowhere will you see such absolutely natural style (much of it I regret to say bad) as at the end of a long and punishing cross-country race. In many cases it is simply a man's own pluck and strength that carry him home. and it is only in very exceptional cases that we see a pure stylist shine ‘over grass and plough.’ But of this more anon.

The origin of the sport is, of course, to be traced to the old game of Hare and Hounds, more particularly as followed at Rugby... Before the days of universal football and golf there was very little for a man who had not means for hunting and shooting to do during the winter, and just thirty years ago the first  cross-country club sprang into being. Mr. Walter Rye, the father of paper-chasers, aided by a few kindred spirits, formed the Thames Hare and Hounds Club, which still lives and flourishes... The Thames certainly possess the most genuine and sporting course near London, and the finish over Wimbledon Common cannot be surpassed...

Next in order of seniority come the Blackheath Harriers, who sprang into being in 1869, under the title of the Peckham Amateurs...  The other metropolitan club which calls for special notice is the South London Harriers, both on account of its age and its record. The S. L. H. preserves its youth in a wonderful manner, and encounters its friends from Blackheath in every imaginable sport. It must not be forgotten that the big cross-country clubs do great service to the cause of athletics generally, and the sports held under their direction rank among the biggest events of the year... The race par excellence of the year in the eyes of all metropolitan athletes is the 'Southern Counties’ at present decided over a terribly stiff course round the Watkin Tower at Wembley... 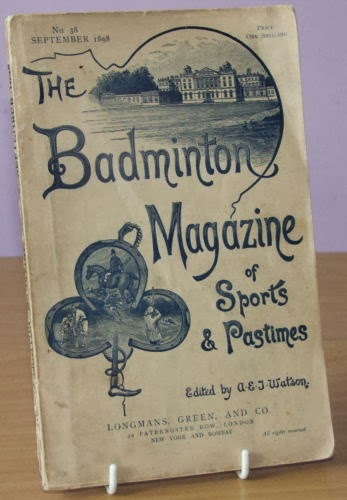 When we consider the sport itself, the reason of its popularity, especially in the metropolitan district, is not hard to find. The cost is trifling, the outfit of the simplest, and it can be pursued at an hour which would render any other outdoor sports impossible. It is difficult to overestimate such advantages to the average Londoner who cannot call his time his own. There is no more delightful sensation than that of a good stretch over a sporting course,  when wind and limb alike are in good condition, and one can stride out right through from end to end. Much senseless rubbish has been talked about the dangers of cross-country running; but these are incurred only by the foolish. In the first place, let no one make the attempt who is not absolutely sound. A collapse which, on the running-path within reach of the friendly pavilion, is trifling, becomes a very different matter five miles from anywhere, in a strange country, and with the nearest man's back fast vanishing through the gloom. Never shall I forget the unpleasant sensation of hunting for a lost Blackheathman in the November blizzard of 1893, when every turnip seemed to take the shape of a senseless corpse! The gentleman in question still lives, however, and blesses the name of the eminent physiologist against whose hospitable door he stumbled. Secondly, I must strongly advise all beginners to wear jerseys and shorts of sufficient thickness. Silk and gauze, which is all very well in the summer, gives very scant protection when the temperature nears the twenties, and the slight increase of weight is amply compensated by the security from chill and cramp. A great safeguard. too, comes from the use of woollen gloves and mittens protecting the wrist and forearm. These should be always worn on a really cold day.

The only proper shoes are those made for the purpose by the leading makers. They should be provided with a broad heel-strap, very low heels, and a steel plate protecting the foot from the jar of a spiked sole on a hard road. The one thing to do is to pay a good price to a good maker, and that will be found the truest economy.

The best training for cross-country running consists of lots of walking, steady work over the most varied country to be found, and once a week a good fast spin on the cinder path. This is absolutely necessary to a team that means to shine in a punishing race; practice on the path gives just the right amount of dash and finish to carry one home in the last mile. During the last fortnight of training once a week across country is all that should be attempted.

As regards style, men run well across country in all shapes and aim. While in a race on the track between picked men one general principle seems to inspire them all, in the ‘illegitimate sport’ the case is very different. The reason is to be found in the varying nature of the ground covered. While A rejoices in the strength which carries him through the mud, and revels in the most sticky and holding plough, B is a natural stylist, a
pretty jumper. and a flyer over the portions of grass and road which are beneficently placed in his way; thanks, however, to  the variety of a representative course very few seconds will separate the rivals in ten miles'.