Today sees the final races of the 2014-15 Surrey Cross Country League, sore foot permitting I hope to run at Richmond Park in a Kent A.C. vest later. So as part of my continuing research into the history of running in my part of South London, I thought I would write about a previous cross country champion and founder of my club - Herbert Cowper Scard. An obituary notice from 1931 sets the scene:

Mr Herbert Cowper Scard, a solicitor who had practiced at Greenwich and Woolwich police courts for many years, died at the age of 65. In the late eighties and nineties Mr Scard was regarded as one of the finest cross-country runners of his day. He was champion of the Lewisham Hare and Hounds in 1888-89-90-92-95, and 96, and also held the Order of Merit of the Blackheath Harriers as their champion in 1889, and possessed scores of other trophies. Mr Scard was also associated with the Kent Athletic Club' (Straits Times, Singapore, 29 May 1931)

Scard seems to have started out running for Blackheath Harriers. In 1888, he 'ran grandly and did the fastest time' in the club's Four and Three-Quarter Miles Members' Race at Blackheath (Lloyd's Weekly Newspaper, 18 November 1888), and he ran for the club in the National Cross Country Championship at Kempton Park Racecourse in 1889 (Manchester Courier, 4 March 1889).  Between 1888 and 1892 he won the Blackheath Harriers Cross-Country Challenge Cup four times.

In 1892, 'A Members' Two Mile Handicap produced a splendid struggle between two men, H C Scard 50 yds start, beating F Stephens 230 yds, by half a yard in 9 min 53 1/5 sec' at Blackheath Harriers' annual athletic meeting. This took place at Catford Bridge with 'a large and fashionable attendance' (York Herald, 18 July 1892). The following year he is reported to have run for Blackheath Harriers in the One Mile handicap in the the Spartan Harriers athletics and cycling meeting at Invicta Athletic grounds, Plumstead: 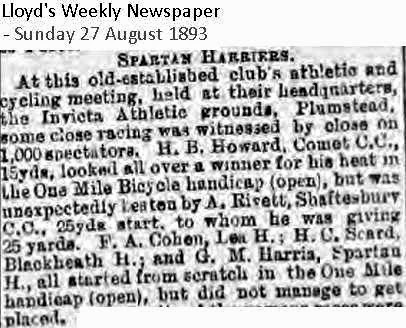 I have come across reports of Scard winning the One Mile Handicap at Colfe's Grammar School Sports in Catford (Lloyds Weekly Newspaper, 19 April 1896), and the same distance race at Stamford Bridge at a London Athletic Club event (London Daily News, 13 April 1896). Shortly after, in another London Athletic Club Spring Meeting at Stamford Bridge, he came second in the 1.5 Miles handicap. He was listed as running for 'Lewisham H.H', showing that the latter was not just a cross country club but was now taking part in track athletics events (Sheffield Daily Telegraph, 18 May 1896). In 1897, he ran in the first Inter-County Cross Country race at Wembley Park: 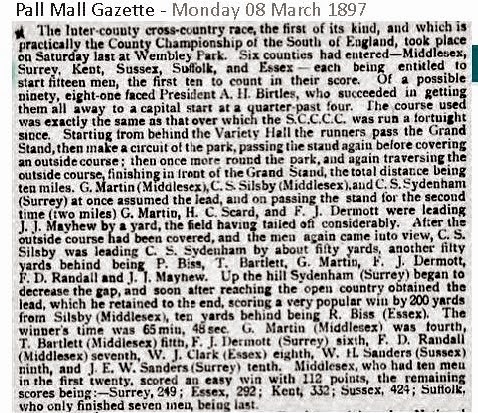 Scard was also for a time Vice-Captain of the Goldsmiths Institute Athletic Club. He is listed as such as in 'A Handbook to the Goldsmiths Company's Technical and Recreative Institute 1896-87',  with the team Captain being Alec Nelson - later a notable athletics coach as discussed here previously.

In 1898, Scard won the Lewisham Hare and Hounds Four and a Quarter Miles handicap at Ladywell, followed by W.W.Lamb and H. Larkins (Lloyds Weekly Newspaper, 27 February 1898). Later that same year, Lewisham Hare and Hounds merged with West Kent Harriers to form Kent Athletic Club, which remains based in the Lewisham area at Ladywell track to this day. Scard must have been actively involved in the merger, as according to club historian Len Reilly, he was Kent A.C.'s first treasurer.

In 1900, Scard ran for Kent A.C. in the Printing and Allied Trade Sports meeting 'held at Herne Hill grounds in the presence of about 3,000 spectators'.This was at what is now known as the Herne Hill Velodrome - as was often in the case at that period, cycling and running races were held as part of the same event. Scard came 2nd in the One Mile Handicap behind A.H. Lye (Herne Hill Harriers) and ahead of Kent A.C.'s A.E. Godsall: 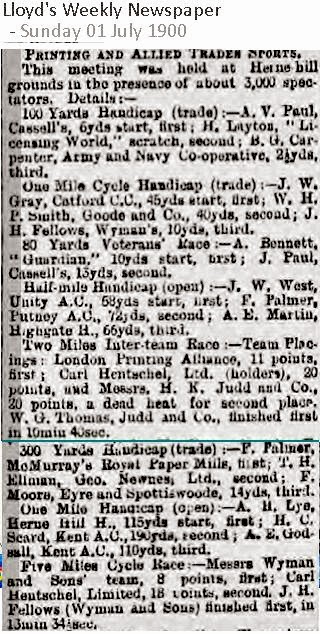 Scard continued to be involved in the club after he had passed his peak as a runner. A 1908 notice for Kent Athletic Club advises that:

'The next evening meeting will be held at the Ladywell recreation grounds on Tuesday next, 26th inst., commencing 7.30 p m. The following events are down for decision - 109-yards and 1 mile handicaps and entries with fees, close on Saturday next... Members may train any evening at above grounds... and intending members may obtain full particulars from Mr. H. C. Scard, 30, Blackheath road, and Mr. A.J. Jennings, 19, Blythe vale, Catford who attend at Ladywell on Tuesday and Thursday evenings' (Kentish Mail Greenwich And Deptford Observer, 22 May 1908).

Over a hundred years later, Kent A.C. are still to be found at Ladywell on Tuesday nights, and not doing too badly in cross country either.