What is the fastest parkrun in SE London? And how much difference does the course make?

All parkruns are equal but some are more equal than others... yes they're all 5k distance (more or less ;-)) but anyone who has run more than one knows that some courses are faster. There are various reasons, such as the terrain (tarmac is generally faster than trail) and how many slowing twists and turns there are, but obviously the main factor is hills. Up hill sections slow most of us down, and even  if we go hard down hill it is rarely enough to make up the time lost on the ascent.

Still, hilly courses are excellent training and for some its enough of a challenge  to just compare times week in week out over the same course. My home parkrun at Hilly Fields is one of the hillier in London, as the name suggests, and I have run it 73 times. But sometimes its good to see how fast you can go on the flat, and if you are chasing a target time it obviously makes sense to seek out a faster course now and then.

But can we quantify how much difference a course makes? Clearly it partly depends on the individual. If you are very strong on hills, then of course you might not notice as much a difference in time when moving on to a flatter course. If, on the other hand,  you can barely keep going up hill you are likely to benefit more when there's less hill to deal with.

Making more general comparisons is more complicated than it seems, as I found when looking at runs in the South East London area (with Mile End across the river also included as it's one of my nearest parkruns as the crow flies). One obvious measure is the average run time which the parkrun website gives for each run. I assume that by average, parkrun refer to the mean. This is calculated from aggregating all the run times from an event and dividing them by the number of runs - in the case of Hilly Fields currently over 15,000. 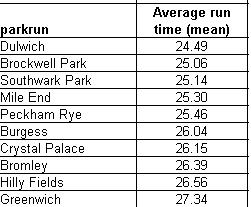 In my area that makes the flat tarmac course at Dulwich the fastest, more than two minutes faster than the hills of Hilly Fields and Greenwich's Avery Hill Park course.Still I was surprised to see Brockwell Park coming in second fastest when it is certainly much hillier than the pretty flat Southwark, Burgess and Peckham Rye courses. Average times might be affected by various other factors though - perhaps some courses attract more, faster club runners which lift the average while others might have larger, more inclusive fields with a higher proportion of slower runners. Dulwich parkrun has a strong association with Dulwich Runners, Brockwell Park is home to Windrush Tri club, Hilly Fields is close to Kent AC's track, whereas Burgess parkrun has no nearby club - does that affect its times? It's important to recognise that what's being measured here is not how fast the course is as such, but how fast the people running it are. There is a relationship between the two - even the fastest runners run more slowly on tougher courses - but some parkruns seem to have faster fields (i.e. more generally faster runners)

Another way of looking at the average is the median time - that is the time of the runner who finished half way down the field. I would have thought that would ameliorate the 'club runner effect', as the times of the faster runners don't affect the average in the same way. As I don't have access to all the data for parkruns ever, I have just calculated this for all runs last week, that is 25 Jul 2015: 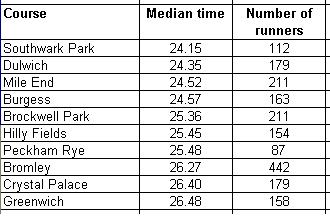 On the median measure, Greenwich still appears to be the toughest course. Southwark Park is now the fastest, with Dulwich slipping into second. Burgess is now faster than Brockwell Park which I would expect. But I certainly don't believe that Hilly Fields is faster than Peckham Rye - there must have just been a faster field at Hilly Fields that day.

So how do the faster runners compare? What about the course records? Well Bromley comes out fastest for both men and women, with Dulwich and Brockwell Park in the fastest four for both. But course records can sometimes just reflect that a top runner turned up one day. Hilly Fields certainly wouldn't be seen as faster than Burgess Park by most runners, but the fastest male time at the former is 22 seconds ahead of the latter, set on Christmas Day 2014 by team GB mountain runner Shaun Dixon (mind you Burgess record holder Max Nicholls is a junior Team GB mountain runner who could probably also get a good time at Hilly Fields).

More instructive is comparing course records set by individuals at different courses. Kent AC's Amy Clements' has the records at both Dulwich and Hilly Fields, the former 1:18 faster. That's in line with the gap in average times between the two. But  this year's Manchester Marathon winner Paul Martelletti holds records at Mile End and Southwark Park- is the former really faster, or was he just taking it a bit easier in Southwark that day? 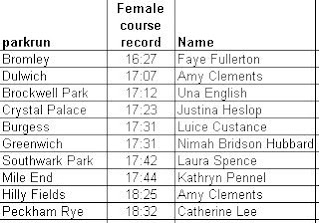 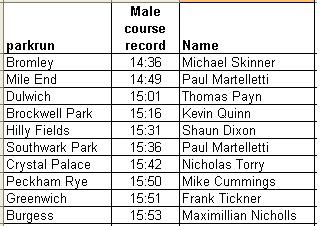 To exclude the 'anomolous super-speedy visitor effect', I've also looked at averaging the last ten fastest finish times at the events. Dulwich and Mile End are in the top three for men and women, Hilly Fields and Greenwich in the bottom three. 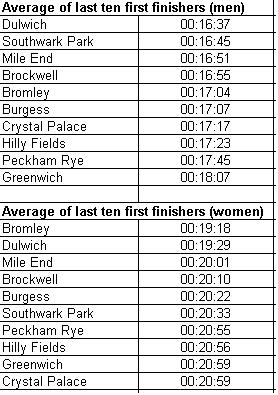 Not sure what to conclude from all this - on most measures Hilly Fields and Greenwich are at the slower end, and Dulwich is clearly one of the fastest. But how much difference it makes depends of how you measure it, and of course on the individual. Burgess Park is definitely the fastest for me, my PB there (19:42) is 92 seconds faster than for Hilly Fields PB (21:14), with my fastest times for Dulwich, Southwark Park and Peckham Rye somewhere in between. So I'm surprised that Burgess doesn't figure higher up the speed tables - maybe it just needs some faster runners to run there!


[updated 1 August with median times; all statistics as of 4 July 2015 unless otherwise stated]
Posted by Unknown at 18:09