The last race of this year's Assembly League will be hosted as usual by Beckenham Running Club this week. While the 5k road race takes place on local streets, runners meet up and change at the cricket club ground on Foxgrove Road where the club is based, and most of the runners do a circuit or two of the cricket ground to warm up before racing.

Beckenham Cricket Club has been based at Foxgrove Road since 1867, and has been associated with other sports too since the early days. It gave birth to a tennis club in 1879, and judging by the following report, athletics was also part of its early activities.
In June 1881, Beckenham Cricket Club held its 'annual athletic meeting',  an event that featured both running and cycling races, as well as  entertainment from 'The band of the 11th Hussars (Prince Albert's Own'). The running races ranged from the 'hundred yards' to the Mile. 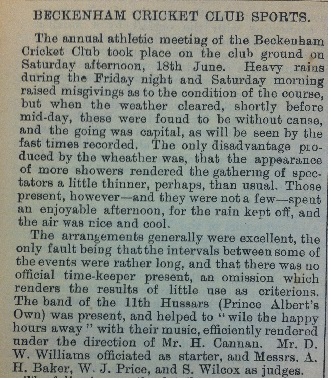 The 120 Yard Hurdles featured competitors from clubs including Beckenham Cricket Club, Private Banks Cricket Club, London Athletic Club, Arundel Athletic Club and Crystal Palace School of Engineering. Interesting that while clubs dedicated to particular sports existed by this time, the exclusive specialisation of athletes was not as developed as it later became - as is shown by a cricket club organising a running and cycling event, with cricket, football, running and cycling club members taking part. 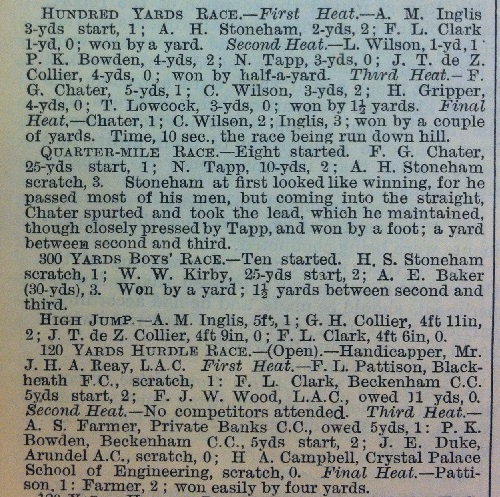 The Mile Race (Open) featured 22 runners, with T. Shore of London Athletic Club acting as the Handicapper. Races were routinely handicapped in this period, with runners being given a head start according to their form and ability.  So the winner, J.E. Dixon (Spartan Harriers), had a 130 yard start while H.B. Burrows, South London Harriers was given a 50 yard start. It was 'A well contested-race, though the  winner led throughout, and won by ten yards'. Third placed H.D. Thomas (Blackheath Harriers) finished three  yards behind 2nd place, having  started at scratch (i.e with no head start). The winning time was given as 'four minutes, 24 and one-fifth seconds'.

The Challenge Cup 'was presented by His Highness the late Rajah of  Kolapore' to 'Mr A M Inglis, who had gained the highest number of marks in the club events', including winning the half-mile and the high jump. Other prizes were awarded by Lady Inglis (his mother) - Julia, Lady Inglis (born Julia Thesiger), lived in Beckenham after returning from India and wrote a book about her experiences in the Siege of Lucknow. Her son Alfred later played cricket for MCC and, on one occasion, Kent.

The cycling race included cyclists from clubs including Brixton Ramblers, LAC, Dewsbury BC, Crichton BC, London BC and Wanderers BC (in that period it seems that clubs were generally known as Bicycling Clubs - hence BC- rather than Cycling Clubs as they soon became known).

It was announced by Mr Percy Bicknell at the end that the rumour that  the club was about to give up the ground was untrue - in fact 'the ground had been secured for a period of 10 years'. Thanks to the efforts of these Victorian sporting pioneers, cricketers, footballers, tennis players, runners and others are still using these facilities more than a century later. 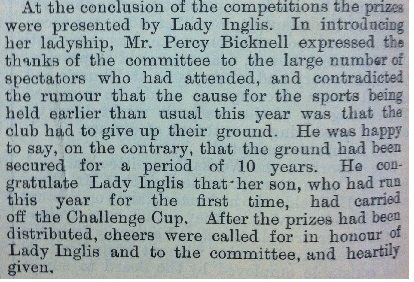 Source: The Beckenham Journal, 1st July 1881
(there are bound copies of this journal in Bromley reference library)
Posted by Neil Gordon-Orr at 06:00