Last weekend around 30,000 people took part in the Berlin Half Marathon, while another 25,000 ran in the World Half Marathon Championships in Copenhagen. But never mind that, on Sunday I headed down to Croydon for the rather more modest Streets Ahead Croydon Half Marathon, completed by 436 runners. Size isn't everything you know... it was a lovely Spring day, and a friendly event with the starter inviting us to enjoy Croydon's 'sunny magnificence' 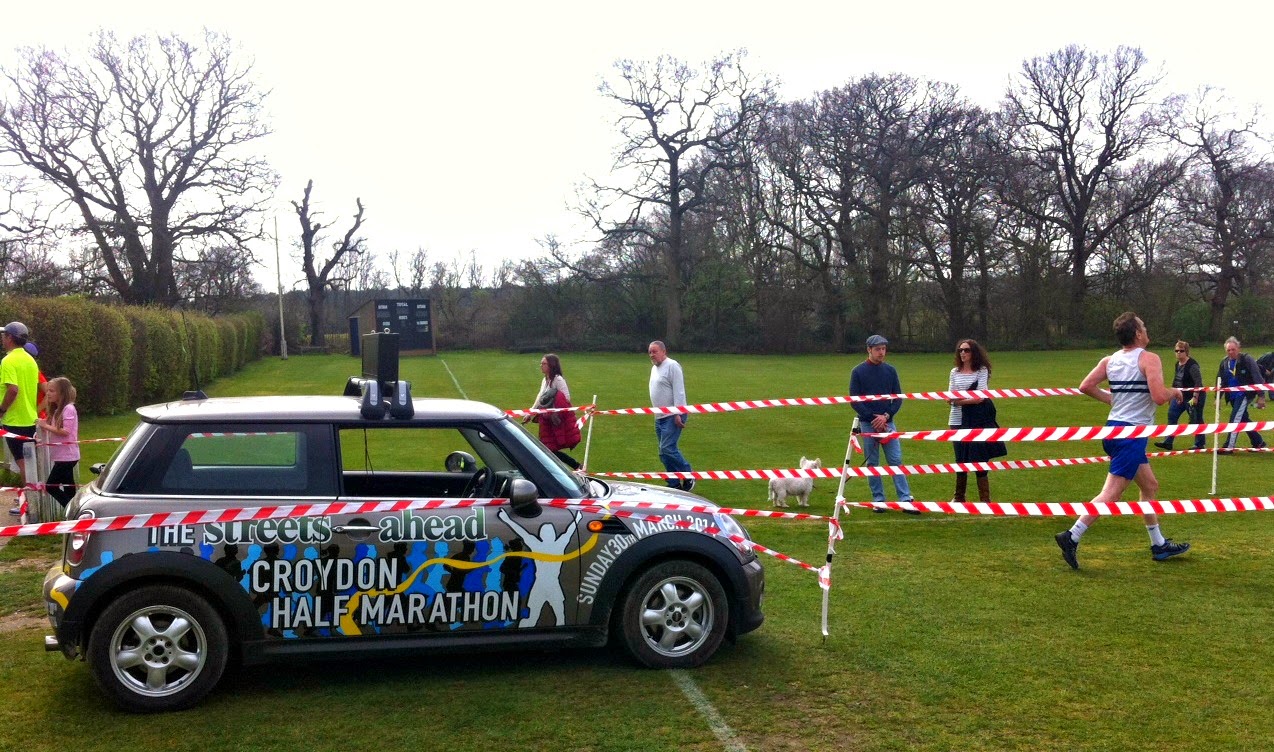 Organised for the 4th year by local running club Striders of Croydon, the run raised funds for local homeless charity Nightwatch. Kevin Quinn came in first with a time of 1:13:44, while Lisa Harris of Croydon Harriers was first finisher amongst the women runners in 1:26:49. 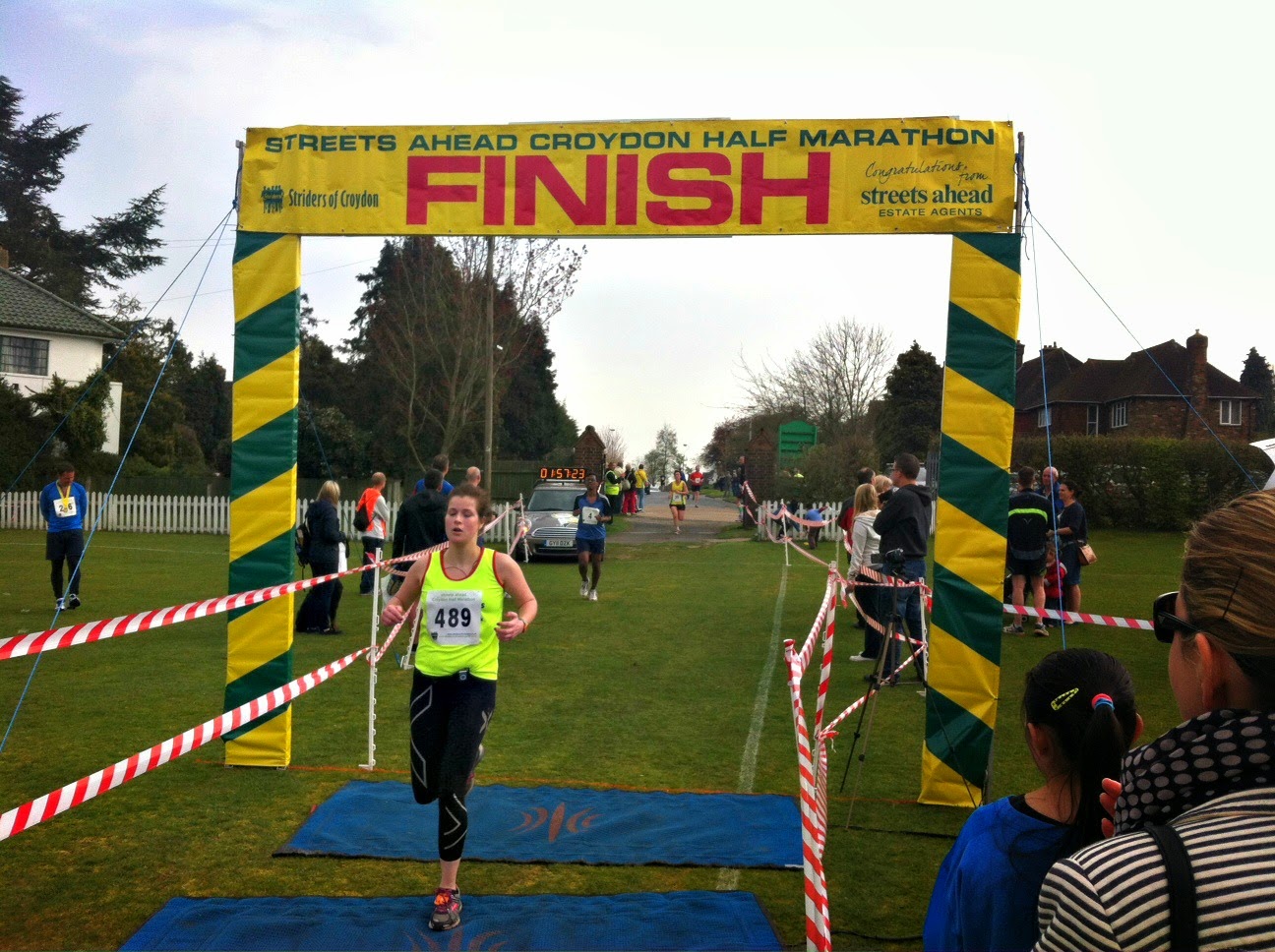 The race finished at the event centre at Sandilands Sports and Social Club, home of Striders of Croydon. Easy to take these places for granted, but I've come to appreciate these little green oases where people have held on to sporting facilities rather than sell them off to developers to build on. 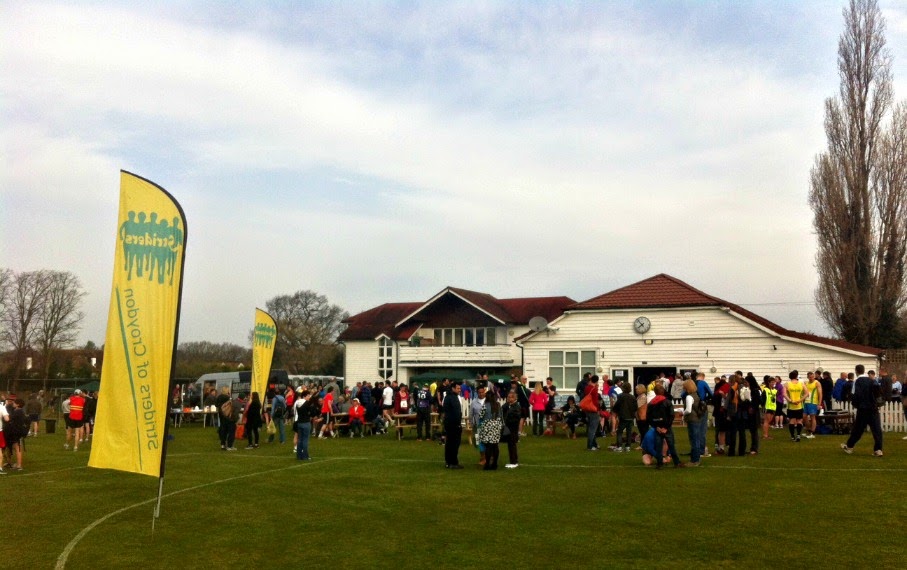 The route headed through the flowery suburbs in the area of Sandilands station, with their mock tudor houses and magnolia trees, and then round the perimeter of Lloyd Park (home of Lloyd parkrun) and the edge of the woods on Addington Hillls. Quite challenging in parts, but with a very welcome long downhill stretch on Shirley Road. 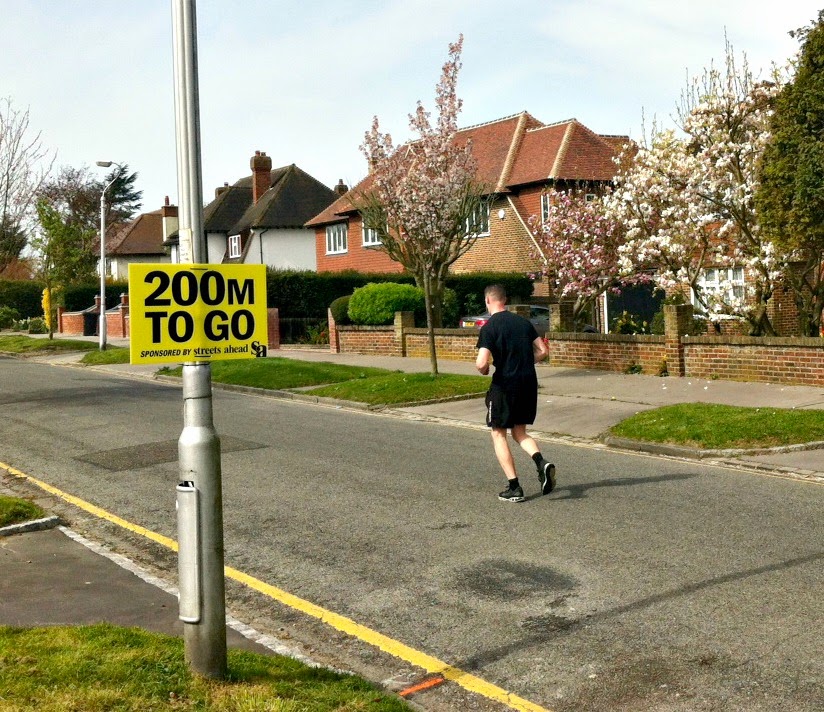 Just like in Berlin, the course negotiates tram lines. Unlike in Berlin, there are also farm buildings. Certainly within the boundaries of Greater London and the London Borough of Croydon - but were we really in London? In So... F*ckin Croydon, a nice essay celebrating Croydon's counter-cultural history, Les Back writes:


'Traditionally a Londoner - a true cockney - was someone born within the sound of Bow Bells.  Perhaps, the cockneys of the informational age - the age of urban light - are those born in sight of Canary Wharf.  The glow of the Capital's cityscape is clearly discernible from the Surrey hills, yet Croydon is situated at a junction point within the magnetic field of London's geography... The boundaries of metropolitan inclusion and expulsion oscillate around Croydon's identity. Artistically this ambivalence is productive.From one alignment of forces Croydon is expelled by the inner London authentics and cod cockneys who - like Lydon and Bowie - want to confine it to a satellite colony, a kind of urban Alcatraz for the stylistically flawed.  This is countered by the desire in others that Croydon be drawn whole-heartedly into the Capital and South London proper.  Then, there are those suburbanites who look the other way into the green heart of the North Downs. They want to cultivate success and embrace the appearance of affluence through “the illusion of country living”'.

So that's yes and no... Must admit in my tired state when I first got there I caught sight of these fine beasts in the corner of my eye and thought they were ponies! 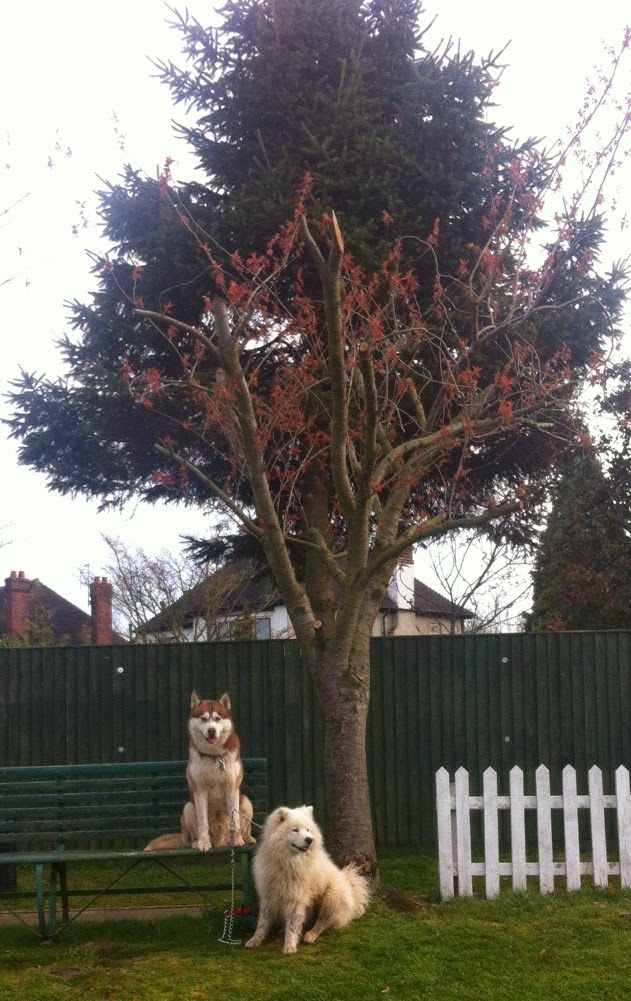 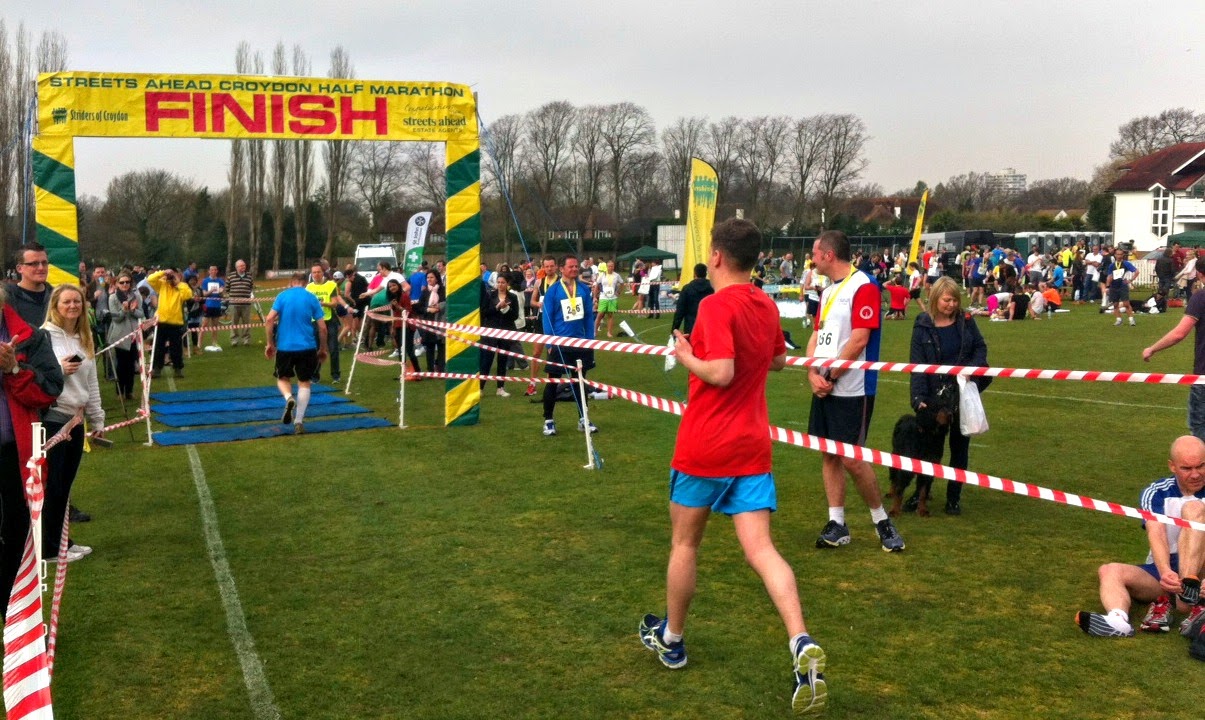 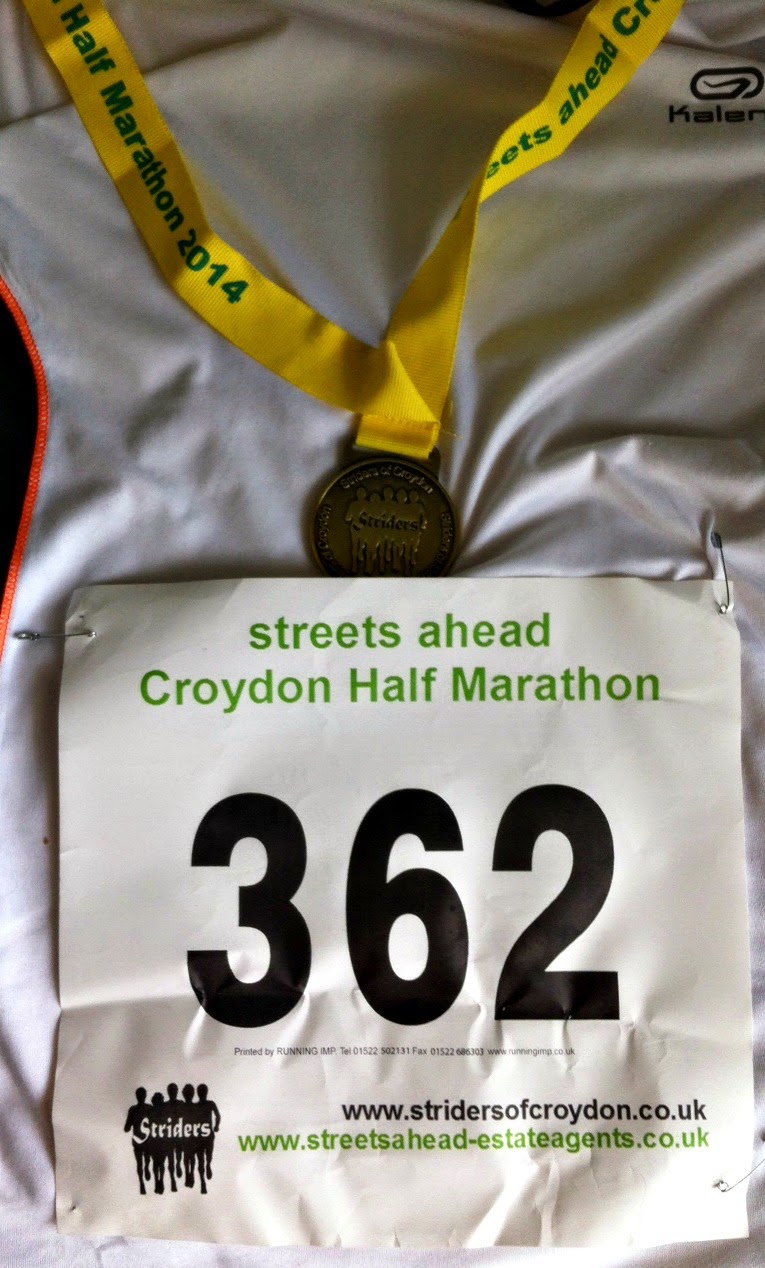 Posted by Transpontine at 21:24