Staying Out for the Summer - Start of 2015 Assembly League

It felt like the start of the summer season proper last week (April 9th) with a warm Thursday evening for the first fixture of the Assembly League in Beckenham. The League involves 13 London/Kent clubs in a series of six 3 to 3.5 mile road races between April and September. 2015 marks the 40th year of the competition (for a bit more history see here).


After meeting up at Beckenham Cricket Club (the home of Beckenham Running Club), 237 men and women runners headed from the start in Foxgrove Avenue on a course that circumnavigates Beckenham Place Park on surrounding roads/pavements. The three mile route heads up and over Crab Hill in the first mile, then remains fairly flat until near the end. After the two mile point at Downham McDonalds on Bromley Road it turns back westwards, entering Beckenham Place Park from the Beckenham Hill Road entrance with the last third of a mile a long upward slope towards the finish by the old Beckenham Place mansion. On this occasion the final stretch was accompanied by a magnificent sunset.


The race was won by Pete Tucker (Ravensbourne) in 15:18, with Kent AC's Amy Clements coming first among the women runners in 16:41 (Amy won three of last season's six races in the winning Kent AC team). It was a good start for Kent AC all round, coming first in both the men's A & B teams, and the women's A team. Overall we had 40 runners taking part, a great turn out. In addition the club's oldest member, Ron Hale, was on hand to buy drinks in the bar afterwards to mark his recent 90th birthday.

Next stop in the Assembly League is Victoria Park on May 7th. 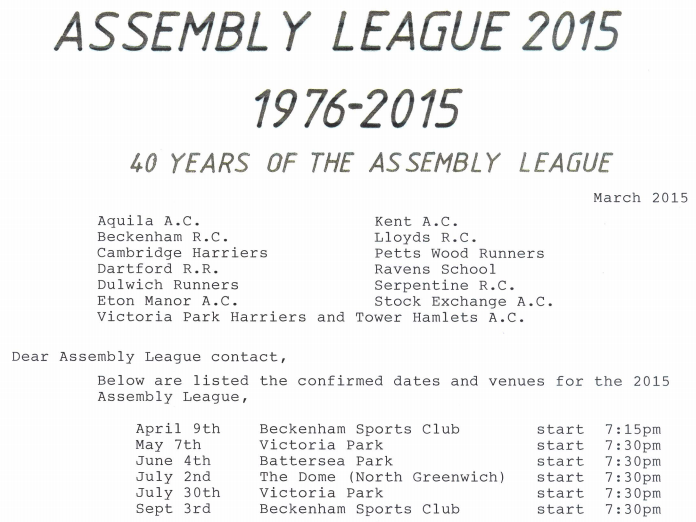