'Why do they run away? this is a knavery of them to make me afeard'

The race was preceded by a one mile children's event, which was all very cute but definitely cost me a place in the 5k later as the children stayed on to cheer their parents... I was running along quite happily when at the end of the second lap a child called out to the guy behind me 'Dad, there's a little boy beating you' (there was a junior runner ahead of us both). In no time at all, said Dad had moved up a gear, overtaken me and headed off in hot pursuit of his youthful rival.

'Over hill, over dale,
Through bush, through brier,
Over park, over pale,
Through flood, through fire,
I do wander everywhere,
Swifter than the moon's sphere'

It was a hot evening, and where better to be than in the green outdoors? At this time of year with the days at their longest and the sun at its height, people have celebrated midsummer revels for thousands of years with dancing and games. In his book on seasonal customs, The Stations of the Sun (1996), Ronald Hutton notes that it was once common in many parts of  Europe to light festive bonfires on Midsummer Eve (23 June). An  Elizabethan ballad  mentions that 'the nimble young men runne leapinge' over Midsummer fires. There was no fire leaping in Dulwich Park this year, but plenty of nimble men and women of various ages running around.

The drama of the Green World

Writing about A Midsummer Night's Dream and other Shakespearean comedies, the critic Northrop Frye famously wrote of the ‘drama of the Green World’, with the action moving away from the confines of 'the normal world'  to a woodland setting of rebirth and dreams where the social order is suspended and contradictions are resolved. If the characters generally have to return to the normal world afterwards, it is to a better place than when they left it as a result of their adventures (Frye, The Anatomy of Criticism, 1957).

For me, running races - perhaps especially in parks, woods and fields - functions as a kind of Green World in a similar way. A time and space outside of everyday life when we can temporarily leave behind worries about work or the state of the world, when the things that divide human beings are set aside for a common experience of focusing solely on the immediacy of our physical bodies and the terrain we move over, as fast as we can. And if we cross the line hot and exhausted, we generally feel better for it afterwards. 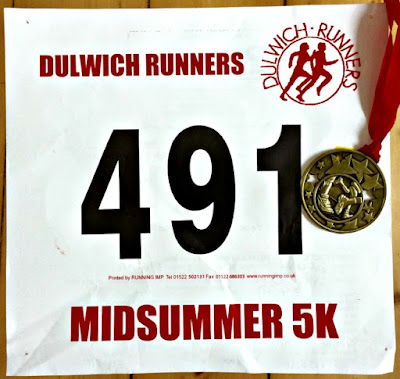 (all quotes in italics from Shakespeare's A Midsummer Night's Dream)

See previously: Running in Dulwich Park for a bit more about its history and running culture - in fact the park's origins have a connection with Shakespearean actor and theatre owner Edward Alleyn.

Jack Kerouac running down a mountain
'These forms who hasten by' - runners on the Pilgrims Way, 1920s
'You just had to run' - Karl Ove Knausgaard
Morrissey - List of the Lost
Burns Night Running Thoughts
Running in the Railway Children
Running to Paradise - W B Yeats
The Sky of a Saturday Morning - John Updike
The Road is a Strange Country - Rebecca Solnit
The Runner - W H Auden
Once a Runner - John L Parker jr
Louisa May Alcott - 'A Joy to Run'
Posted by Unknown at 08:11