Alan Turing (1912-1954) was a mathematician and computer science pioneer, famous for his 'Enigma' code breaking work during the Second World War and his postulation of the 'Turing Test' for artificial intelligence. Recently he has been the focus of a campaign to posthumously pardon him of his conviction for 'indecency' at a time when gay sex was illegal.  The conviction blocked his career and prompted his presumed suicide.

Turing was also a keen long distance runner, running for the Walton Athletic Club in Walton, Surrey. In 1947, he competed for Walton AC in the Amateur Athletic Association Championships marathon in Loughborough, finishing in 4th place in 2 hours 46 minutes and 3 seconds. In doing so he narrowly missed qualifying for the 1948 Olympics - his time was less than 12 minutes behind the finishing time of the1948 Gold medallist, Delfo Cabrera. One of his last runs for Walton was in the London to Brighton relay race in April 1950.

The photo below shows Turing running in December 1946, coming second in a race on National Physical Laboratory Sports Day (Turing worked at NPL at the time).  NPL is based on the edge of  Bushy Park (Teddington), and the NPL Sports Club has had its own grounds there since 1912. So it seems very likely that this race took place there. In addition it is recorded in biographies that he sometimes ran to work meetings while based at Bushy Park, so it's almost certain that he ran in the park. Bushy Park today is of course very popular with runners as the place where parkrun started out in 2004 - and where up to 1,000 people still run every Saturday morning. 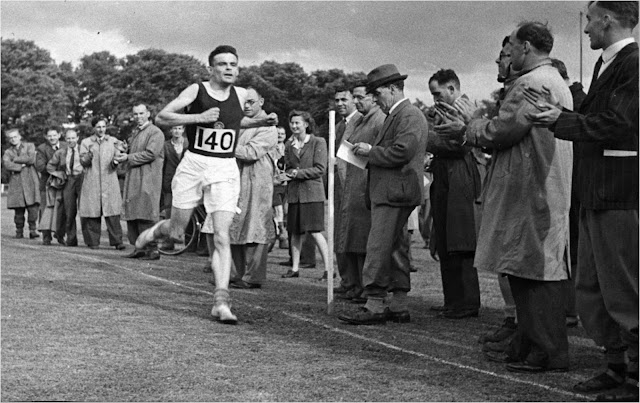 In recent years, Ely Runners have held a Turing Trail Relay  - the 'six stage relay event is run on mainly opposite riverside footpaths from Ely to Cambridge (Jesus Green) and back to Ely... These attractive and interesting footpaths were once used for running by Alan Turing, founder of computer science, whilst at King's College, Cambridge'.

More in the Friday Photos Series: